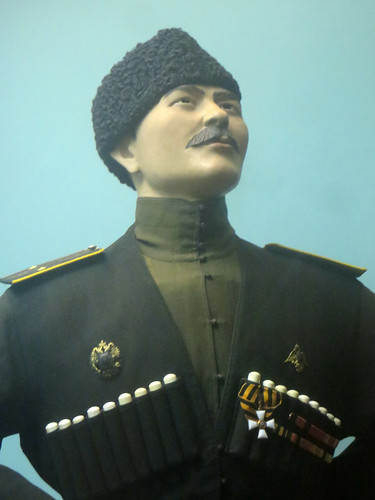 "In you, LORD my God, I put my trust. I trust in you; do not let me be put to shame, nor let my enemies triumph over me. No one."

Oleksander Andrii Dobroshtan stood back from the lightly reeking body. The burning spruce-gum lantern was not sufficiently covering "the necessary perfume of the dead," as his friend and fellow poet, Fadeyka Juska, had written. Oleksander was paid to recite psalms over the dead. He was not inordinately pious. He could read.

His great mustaches made him look older than his years. He wore a woolen Cossack hat tilted at a jaunty, casual angle on his thick mop of black hair, carefully shaved back from his large ears. His lips were full, complimenting his square, dimpled chin.

Oleksander himself died over a hundred and fifty years ago. His biographers give starvation as his cause of death. Oleksander's family know otherwise. His perfectly preserved right index finger is hidden in a great-great-great-grandson's library. His mummified yet immaculately preserved heart lies in a velvet- and eiderdown-filled chest under the kitchen floor of a female relative, a biology teacher that also recites psalms over the dead.

For over a hundred and fifty years Oleksander Andrii Dobroshtan's family have awaited the day when the "Messenger" would arrive, the index finger and the heart reunited. The blessing fulfilled and unleashed. How could anyone imagine that "The Messenger" would be Hunter Biden, with Rudy Giuliani following close behind, an agent of evil intent..."

From "Hunter and Rudy in Ukraine" by Franklin Cincinnatus.

Related Topic(s): Cossacks; Hunter Biden; Rudy Giuliani; Ukraine, Add Tags
Add to My Group(s)
Go To Commenting
The views expressed herein are the sole responsibility of the author and do not necessarily reflect those of this website or its editors.