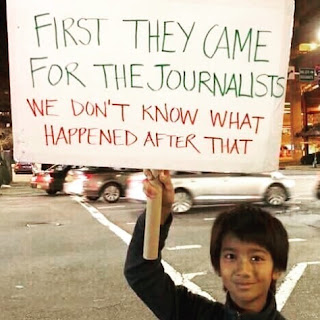 The United States government is seeking to extradite and prosecute Julian Assange for one reason: to punish him for publishing true and embarrassing information about US crimes and intimidate every journalist in the world from doing so again.

If the US government succeeds in doing this, it will strike a devastating blow to the fundamental elements of democracy throughout the world--the freedom of the press and the related ability of citizens to know what their governments are doing.

I say "throughout the world" because it's important to understand that the US government in this case is asserting its prosecutorial authority over someone who is not an American and whose journalistic activity took place outside the United States. The United States is demonstrating its ability to get a foreign government to arrest and extradite journalists who are neither Americans nor citizens of its own country and send them off to the United States to face charges under American law. It's not only a brazen attempt to quash press freedoms; it's a further extension of the United States' arrogant assertion of extra-territorial--indeed, universal--jurisdiction of its laws.

As Jonathan Cook says, those who accept this have "signed off on the right of the US authorities to seize any foreign journalist, anywhere in the world, and lock him or her out of sight. They opened the door to a new, special form of rendition for journalists."

Whether anybody says it out loud or thinks it explicitly, and no matter how slight it might be right now, the sight of Julian Assange being dragged out of the Ecuadorian Embassy in handcuffs is already working in the minds of journalists throughout the world, engendering some pause or consideration about what's worth the risk to report on. It cannot not be so. The consummation of his extradition and prosecution, the sight of him disappearing into the American prison system, will radically change that calculus of risk for every journalist in the world. The minute after sentence is pronounced, every journalist and citizen will open their eyes in a world where a lot of important things they could expect to reveal and see a minute ago will now stay hidden. And they will know it. At that moment, all the bullshit irrelevancies and avoidance mechanisms will instantly dissipate, and it will be clear to everyone what the only issue always was. Too late.

It's incumbent on everyone who claims to value free speech and freedom of the press to do everything in their power to prevent the United States government from getting away with this. That requires focusing one's own discourse and one's interlocutors' and audience's attention on the core issue.

Unfortunately, for seven years, pundits throughout the political spectrum have been assiduously avoiding exactly that, and have instead been blowing smoke, insisting on diverting attention from the core issue of the USG's attack on journalism via its attempt to imprison Assange. They have denied it was really happening and characterized it as an artifact of Assange's paranoia, and/or they insisted that something else was the real issue, the thing we should really be focused on and concerned about.

Related Topic(s): Assange; Defending Julian Assange; First Amendment Press; Freedom Of The Press; Jeremy Corbyn; Julian Assange; The War On Wikileaks; Wikileaks, Add Tags
Add to My Group(s)
Go To Commenting
The views expressed herein are the sole responsibility of the author and do not necessarily reflect those of this website or its editors.