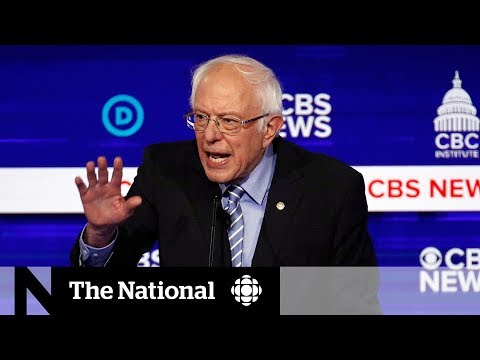 Tuesday night's Democratic presidential debate in Charleston, South Carolina, has been widely criticized in the corporate media, with the candidates' performances denounced for "snarling incoherence" (Politico), for being "manic" (The Hill) and "a genuine freakout" (Frank Bruni in the New York Times), and like "watching professional wrestling" (Dana Milbank in the Washington Post).

What the media pundits were complaining about -- particularly on the cable networks CNN and MSNBC -- had little to do with the constant interruptions and general refusal of the candidates to follow the rules laid down but not enforced by the moderators, a panel of journalists from CBS. They were mainly upset that despite efforts by all six of the candidates opposed to front-runner Bernie Sanders, they largely failed to coordinate their efforts and could not seem to agree on a common line of attack, replicating a similar failure in the debate last Wednesday in Nevada.

As a result, the Vermont senator is likely to take an insurmountable lead in convention delegates in the March 3 "Super Tuesday" primaries, held in 14 states, including California, Texas, North Carolina and Virginia. Those contests take place just three days after the February 29 primary in South Carolina.

Despite the cacophony on Tuesday night, it is clear that the capitalist politicians on the stage in Charleston were pursuing definite strategies, which reveal something about their own social base and shed light on the deepening crisis of the Democratic Party.

Two others made direct appeals to Sanders' supporters. Senator Elizabeth Warren said she would be a more effective advocate for Sanders' policies, which she claimed to support. Billionaire Tom Steyer, seeking to position himself somewhat to the left of the four "moderates," claimed to agree with Sanders' diagnosis of the problems in America while disagreeing with him on the solutions.

Bloomberg's goal in the debate was clearly to survive it and avoid another debacle like that in Las Vegas, which would leave his campaign in danger of becoming an expensive laughingstock. He positioned himself as the most right-wing of the candidates, declaring his support for expanding charter schools, opposing the legalization of marijuana and making no reply when Warren pointed out his long history as a donor to Republican candidates, including such notorious pro-Trump figures as Senator Lindsey Graham of South Carolina.

In his most revealing sally, Bloomberg boasted of how much he spent in the 2018 elections backing Democratic candidates whose victories gave the Democratic Party control of the House of Representatives. "They talk about 40 Democrats," he said. "Twenty-one of those are people that I spent a hundred million dollars to help elect. All of the new Democrats that came in and put Nancy Pelosi in charge and gave the Congress the ability to control this president, I bought -- I, I got them."

The billionaire was about to say he had bought control of the House for the Democrats, but pulled back at the last second to make his comment slightly less obnoxious. But the implication was clear. He was suggesting that he was now in position to buy the White House for the Democrats, using essentially unlimited funds from his $60 billion fortune.

Bloomberg's money had at least some impact on the debate, salting the audience with supporters who had to pay $1,750 to the Democratic National Committee for admission. As a result, there was audible booing when Warren and Sanders attacked Bloomberg for trying to buy the nomination.

So far, however, Bloomberg's ability to actually accomplish the purchase is in doubt. The billionaire has pumped nearly $500 million into campaign advertising and organization in the 14 Super Tuesday states, but according to current polls he trails Sanders in all of them. A detailed analysis in the Washington Post projected that Bloomberg stood to win fewer than 100 delegates out of the nearly 1,400 to be chosen on March 3.

Buttigieg, the former naval intelligence officer and McKinsey consultant for the Pentagon, joined with Bloomberg in portraying Sanders as the candidate backed by Russian President Vladimir Putin, allegedly because his nomination would ensure the reelection of President Trump, whom the Democrats have attacked from the right as a Russian stooge.

The former South Bend mayor spent the entire debate attacking Sanders from the right, frequently interrupting him to the point of deliberate disruption. He sought to present himself as the voice of the congressional Democrats, particularly those in marginal districts in the House of Representatives. He told Sanders that those newly elected in 2018 "are running away from your platform as fast as they possibly can." These include the 11 representatives who have similar backgrounds to Buttigieg, with careers in the military-intelligence apparatus before they entered politics.

Patrick Martin writes for the World Socialist Website (wsws.org), a forum for socialist ideas & analysis & published by the International Committee of the Fourth International (ICFI).
Related Topic(s): Attacks On Bernie Sanders; Debate; Democratic; Primaries, Add Tags
Add to My Group(s)
Go To Commenting
The views expressed herein are the sole responsibility of the author and do not necessarily reflect those of this website or its editors.