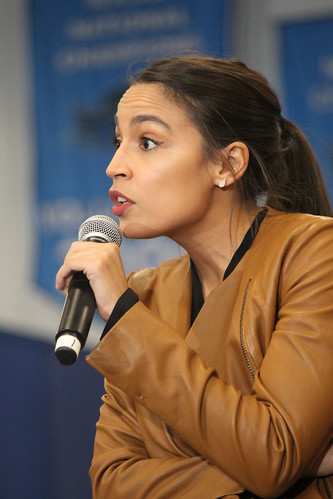 U.S. Representative Alexandria Ocasio-Cortez shared an emotional Instagram Live on Monday evening in which she recounted her harrowing experience during the Capitol insurrection on Jan.6.

Visibly shaken and brought to tears, she describes her fear as she hid in the bathroom of her office. Someone banged on the door and entered the room, repeatedly yelling, "Where is she?"

"This was the moment I thought everything was over," she said. "I mean, I thought I was going to die."

She's not delusional - one of the rioters was arrested following a tweet that simply said, "Assassinate AOC."

AOC's Instagram Live was watched by roughly 150,000 viewers. According to Newsweek, " Ocasio-Cortez's almost 90-minute livestream has amassed more than a million views on Instagram alone. But snippets of some significant moments have amassed at least another 3 million views on Twitter. A two-minute clip of Ocasio-Cortez describing the time she spent hiding in her office bathroom was shared on Twitter by Hannah Croteau, who called it "bone chilling." That clip had amassed more than 2.3 million views by early Tuesday morning."

She talked about the fact that trauma often builds upon past traumas, resurrecting PTSD, and mentioned, "I'm a survivor of sexual assault, and I haven't told many people that in my life. But when we go through trauma, trauma compounds on each other."

If one goes by the headlines the next day, in her 90-minute recording, the few-second revelation that she was a sexual assault survivor seemed to be the only story:

The Guardian: Alexandria Ocasio-Cortez says she is a sexual assault survivor

Washington Post: Alexandria Ocasio-Cortez reveals she is a survivor of sexual assault

Related Topic(s): Abuser; Aoc; Assault; Capitol; Sexual Abuse; Sexual Assault; Trauma; Violence; Women, Add Tags
Add to My Group(s)
Go To Commenting
The views expressed herein are the sole responsibility of the author and do not necessarily reflect those of this website or its editors.

STAY IN THE KNOW
If you've enjoyed this, sign up for our daily or weekly newsletter to get lots of great progressive content.
Series: "AOC- Alexandria Ocasio-Cortez"