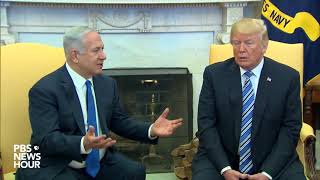 Trump supporters should let Trump hear from them as he is about to commit the United States to a war of Israel's choosing. A mutual defense treaty between the US and Israel would give Israel the ability to commit the US to a war in Israel's behalf.

Remember history. It was British prime minister Chamberlain's guarantee to Poland that started World War II. The idiot British lost control over their own policy and gave it to a crazed and irresponsible Polish military dictatorship.

The attack on the Saudi oil fields that Trump and Israel are blaming on Iran is almost certainly an attack by Israel. The attack is being used to start a war with Iran.

Putin needs to speak up now before the war starts, because it is impossible that Russia will be able to avoid involvement. The chances are substantial that Armageddon is about to unfold while the world sits stupidly.

Related Topic(s): Armageddon; History; Iran; Israel; Trump, Add Tags
Add to My Group(s)
Go To Commenting
The views expressed herein are the sole responsibility of the author and do not necessarily reflect those of this website or its editors.