Protests against racism and police brutality are being violently attacked across the country, even as they receive less media attention.

A photographer was killed in Louisville, Kentucky, after a gunman opened fire into a crowd of demonstrators demanding justice for Breonna Taylor on June 27. The deceased was identified as Steven Lopez. A gunman is in custody for his killing.

Taylor was a 26-year-old African American woman killed during a no-knock police raid by Louisville police on March 13. Brett Hankison, one of the officers involved in the incident, was fired on June 23 after weeks of protests. No officers have been charged with Taylor's death.

Protesters were demanding the arrest of the officers who killed Elijah McClain, a 23-year-old Black man who died in police custody. McClain also played the violin. McClain was violently arrested in August 2019 as he walked down the street. Police used a chokehold on him, causing him to sob, "I can't breathe," the same phrase uttered by George Floyd during his arrest. While handcuffed on the ground, he was injected with ketamine, a powerful sedative, and lapsed into a coma from which he never recovered. McClain later died at the hospital. Weeks of protest prompted the state to open an investigation into McClain's killing, but protests continue and no arrests have yet been made.

A couple brandished firearms at protesters marching through their neighbourhood during a protest against St. Louis Mayor Lyda Krewson on June 28.

Protesters were marching towards the home of Krewson, following a statement she delivered during a Facebook live on June 26 where she identified members of the public who had written letters to the City Hall demanding she defund the police.

Krewson has issued an apology for her statement via Twitter, and the Facebook video has since been taken down. In a video posted to social media, peaceful protesters walking past the armed couple looked on in astonishment as they were ordered by the couple to stay away from the home. President Donald Trump tweeted a video of the incident.

Detroit Police have opened an investigation after a video captured police SUV repeatedly accelerating and striking a group of anti-police brutality protests on June 28. Several demonstrators were hospitalized. 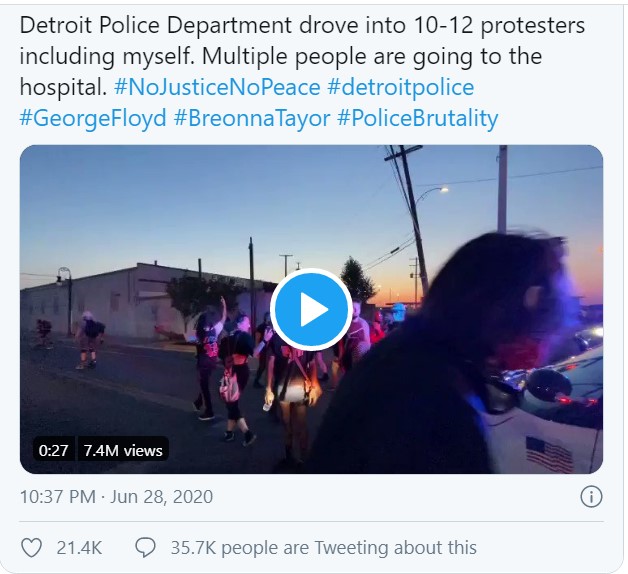 On June 30, the New York Police Department violently cleared a protest encampment outside of City Hall just prior to a vote on the city budget. Activists are demanding New York Mayor Bill de Blasio cut $1 billion from the NYPD's $6 billion police budget to invest in education, housing, and other social services.

On June 29, about 100 students, faculty, and community members delivered a petition of 6,000 signatures demanding Johns Hopkins abandon its armed private police force. On June 12, Hopkins announced the force would be suspended for two years, but activists are demanding it be cancelled altogether.

Related Topic(s): Police; Police Abuse Of Power; Police Brutality; Protester; Protester Arrests Sentencing Imprisonment, Add Tags
Add to My Group(s)
Go To Commenting
The views expressed herein are the sole responsibility of the author and do not necessarily reflect those of this website or its editors.