The now famous Op-Ed by "Anonymous" appeared in The New York Times on Sept. 5, 2018. By the very next day, The Times was publishing letters taking a variety of positions on both the process of publishing it and the content of the piece itself. Among the positions taken were:

"The New York Times's publication of an anonymous Op-Ed by a senior official in the Trump administration in this hour of crisis for the nation is of the highest public service. The piece essentially confirmed what many Americans had already feared, that this president is unfit to serve."

"I disagree with essentially all of President Trump's policies and initiatives, and find his statements on race, immigrants and women (to name a few) abhorrent. However, The New York Times's publication of an article written by an unnamed White House official is disgraceful. . . . It is not acceptable to engage in personal attacks in an international newspaper while hiding behind a cloak of anonymity.

[One should note that in Bob Woodward's new book he has a whole bunch of anti-Trump folks within the White House itself, elsewhere in the Administration, and the Republican Party in general, some of whom are Deep Throats and some of whom are perfectly happy to go on the record. Indeed, many of them, as quoted by Woodward, agreed to be recorded.]"

"This Op-Ed is astonishing and reflects a serious and deep transformation of the American political system. It changes the United States from an open democratic dialogue to a conflict of hidden factions, court politics and cabals. The Op-Ed is both essential and deplorable. The failures of Trumpism must be combated, but an 'administrative coup d'e'tat,' Bob Woodward's phrase, is not how democracies succeed. We succeed through open debate, taking responsibility for our own political fate, free elections and majority rule."

Immediately after "Anonymous' " Op-Ed appeared a dear friend and political colleague sent me the following note:

"Written by a senior official of the Trump administration who prefers wisely to remain anonymous in order to protect the sub rosa 'resistance' to the capricious whims of a president with an incapacitated sense of morality this Op-Ed breaks new ground in world history. For the first time in our history, a high-ranking insider reveals the determination of a broadening group of patriots who are committed to protect and defend our nation from the moral, professional and personal insanity of President Donald Trump." 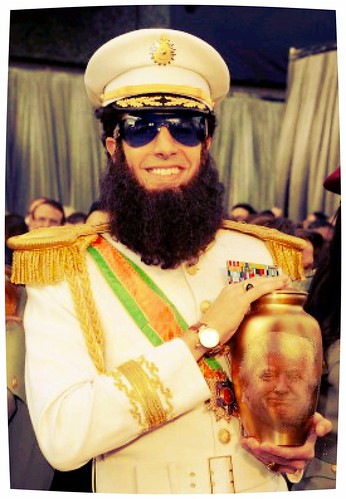 From flickr.com: Trump. Well, apparently if some in the Repub. ruling class wing have their way, it could end this way.
(Image by IoSonoUnaFotoCamera)   Details   DMCA

For me, however, the key sentences in Anonymous' piece have nothing to do with patriotism. They are:

"Don't get me wrong. There are bright spots that the near-ceaseless negative coverage of the administration fails to capture: effective deregulation, historic tax reform, a more robust military and more. But these successes have come despite -- not because of -- the president's leadership style, which is impetuous, adversarial, petty and ineffective."

In sum, the whole discussion about whether the publication of the piece under the "Anonymous" by-line substantively reflects "patriotism," and of the ethics of a) doing what the internal Trump critics are doing, b) publishing anonymously, and c) whether The Times should have done the latter, are distractions from the primary thrust of the column. It is certainly true, as noted in a key statement from one of the letter writers:

"Conspiring to keep an unfit president in office in order to promote the political agenda of his advisers has not avoided a constitutional crisis, but created one [emphasis added]. President Trump's attacks on Congress, the judiciary, [his own FBI and Justice Department], and a free press are the threat to our democracy, not his removal."

But this is not --- and for me this is the central point --- what is in the mind of "Anonymous." He/she is not so much concerned about Constitutional government but rather with Trump's style and with his latterly deviations from traditional Repub. foreign policy. He/she is in fact very happy, as noted above, with what he been accomplished so far by the Trumpite government (see the "key sentences," highlighted above). As I said in responding to my friend (quoted above), with whom I usually agree:

"I think that this person is firm right-winger somewhere in the Administration, White House most likely. Trump has gotten done the three main Repub. policy goals which they have never been able to achieve to this degree before: the tax cuts for the rich and the large corporations, the massive de-regulation program and vast curtailment of other Federal government programs (e.g., in housing, education, and the protection of the environment --- what Steve Bannon termed 'the Deconstruction of the [Federal] Administrative State'), and (to invent a term) the 'Right-Winging' the Federal Court System, especially the Supreme Court (whether it's Kavanaugh or some other far-right-winger, who just happens not to have possibly perjured himself before Congress). On foreign policy, he is a disaster from the Repub. point of view (plus there is the "Russia thing.")

"So, in the thinking of "Anonymous," because he is so stupid, ill-educated, and difficult to work with, and is now deviating from some of central policies, it is time to dump him, if that is at all possible certainly before 2020. For if, in their view, he were to somehow survive Mueller as well as his terrible state of physical and mental health, enough to run then, he would get the nomination courtesy of his racist base but would then be destroyed in the general election, along with the rest of the Party."

This absolutely goes against the long-term interests of the Repub. wing of the U.S. ruling class, which at present is particularly concerned about what Trump is doing on trade, NATO, the U.S.-led more informal international alliance (to say nothing of the international banking system that the U.S. currently dominates but might not forever if Trump keeps going with his newly belligerent foreign policy) --- see Bolton, now becoming much more prominent in that arena than is Pompeo --- and some of them (those outside of the fossil fuel industry) on climate change.

Steven Jonas, MD, MPH, MS is a Professor Emeritus of Preventive Medicine at StonyBrookMedicine (NY) and author/co-author/editor/co-editor of over 35 books. In addition to his position on OpEdNews as a "Trusted Author," he is a Senior Editor, (more...)
Related Topic(s): Anonymous; Class; Class Politics; Class War; Climate; Deregulation-Regulation; Ethics; Government; International; NATO; (more...) Patriotism; Policy; Ruling Elites; Trumpism; Unfit, Add Tags  (less...)
Add to My Group(s)
Go To Commenting
The views expressed herein are the sole responsibility of the author and do not necessarily reflect those of this website or its editors.