The history of "Trump's Wall" is well known. Big item on the campaign trail. Big rouser of crowds. Big focus of back-and-forths from History's Greatest Con Man. And of course, really big focus, big back-and-forth, with the punch line: "Who is going to pay for the Wall? Mexico" (which could have been followed by a rhyming "ho, ho, ho," but the crowd might have really believed it and Trump-the-Con-or in this case might actually have believed it too). Of course, when he was turned down immediately by even the right-of-center Mexican President Pena Nieto, he came up with an idea that would have been criminal under international law, that is sequestering remittances of private persons to pay for a U.S. government project.

But Trump stayed with The Wall as a prime crowd-booster at his, some might say, fascist-style rallies, after he became President. But, in terms of the reality of a Wall-from-sea-to-shining-sea, as has been pointed out by many observers, nothing happened during the two years that the Repubs. controlled the Congress as well as the Presidency. Now one might say "filibuster rule" in the Senate but wily ol' Mitch McConnell might have found a work-around for that one, if he had really wanted to. But he didn't and it's likely that he didn't even want to try.

For The Wall has been becoming less-and-less popular politically over time, outside of "Trump's base." It has also been becoming less popular for practical reasons, such as: many places on the border where a wall could not be built, physically; many places on the border, especially along the Rio Grande, where property owners, many of them usually staunch Repubs., would fight as hard as they could against giving up their property, and their views, for it; the cost, which could get up into the $70 billion range. And so on and so forth.

But Trump is so stuck on The Wall that, as is all-too-well-known, he caused the disastrous-in-many-ways partial government shutdown over it. But then the not-so-great deal-maker was on the verge of making a deal which included somethings the Far-Right doesn't like, like DACA-protection, and some of their leadership, with Ann Coulter way out-in-front, went ballistic. And Coulter has stayed with it, through the increasingly unpopular shut down, and cheering for another one if Trump doesn't get his Wall, with Trump then saying "no-deal-without-one," even as some Repubs. in Congress have had enough and are beginning to drift away. 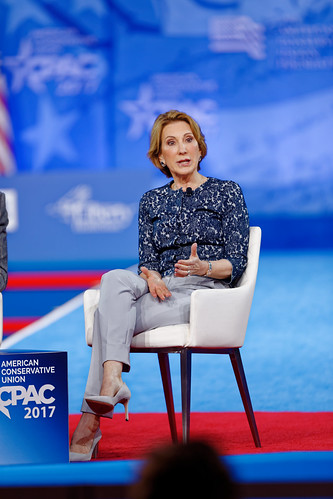 Well we know that Trump would never say about Ann Coulter's looks what he said about Carly Fiorina's: usatoday.com/story/news/nation-now/2015/09/10/trump-fiorina-look-face/71992454/.
(Image by Michael Vadon)   Details   DMCA

And so, why these Trump-Coulter goings on you might ask? Well Coulter is a far-rightist which in this country usually encompasses deep-down racism, and Trump's Wall/Latin immigrant policy, with which he began his Presidential campaign, certainly reflects his underlying racism and his use of it to hold his base together. As I have said (and others have too, of course, including such luminaries as Paul Krugman) on many an occasion "Race is the Trump Card." For Coulter, who has become the symbol of the Wall's supporters, it has provided her with a major opportunity to get back in the Right-Wing spotlight from which she has been absent for quite some time. And Coulter just loves that spotlight.

But why Trump? Likely a variety of reasons. He is indeed probably completely unaware of such facts as that the majority of illicit Recreational Mood-Altering Drugs (the RMADs as I call them) either come in either through points of entry, not the Southern Border, or are manufactured legally here by drug companies, (Perhaps putting walls around the major opioid producers might have a more salutary effect on the Nation's "drug problem" than a wall along the Mexican border would.) Or the fact that the majority of undocumented immigrants here are persons who have overstayed their tourist visas, not ones who made it across the Southern Border. Or the fact that even in the Middle Ages walls had their limits in limiting movement if people really wanted to move.

But as is all-too-well known Trump has never been much for facts. Illustrated most recently by his going ballistic when the major US intelligence agencies failed to list the situation on the Southern Border has a risk of any kind to National Security. Which really undercuts what he might very well try to do when any legislation that that Congress might pass in order to deal with the border issue doesn't include explicit "Wall money." And that is of course declare a "National Emergency."

As this drama moves along, that is precisely what Trump is aiming for. Although on most issues of national import Trump is not much of a planner, helped along by such White House advisors like Stephen Miller and Jared Kushner he could have in fact been planning to get to this point all along. Trump's fascist inclinations are well-known. While he accomplished three of his major objectives in his first two years in office --- major tax cuts for the rich, the beginnings of Steve Bannon's "deconstruction of the Administrative State," and the remaking of the Federal judiciary, with the House of Representatives at least in Democratic hands, and with the Mueller and related investigations (including those of a Democratic House) closing in, he is going to very limited in what he --- perhaps the greatest non-compromiser and non-deal maker (despite his boasting on those matters) ever to occupy the White House --- can do from here on out.

.Mexico to Pay for Trump's Psychiatric Care.. No one says it better than Borowitz.
(Image by nordique)   Details   DMCA

And what better way to go down that road than by the use of the Big Lie Technique --- there's a "national emergency/crisis on the Southern Border" (which even his own appointed intelligence chiefs don't put on their list of same around the world) to justify such a Declaration. Just as Hitler used the Big Lie Technique with the Reichstag Fire to eventually get dictatorial power over Germany. And so, since the House Democrats will not give in on a real border Wall (first and foremost --- forgetting about the politics --- because it is totally unnecessary and a total waste of money) Trump may well try to implement what may well have been his plan all along.

Such a declaration would be immediately challenged in Federal Court and would presumably get to the Supreme Court very quickly. Where its fate would be uncertain. The four liberals would vote to deny its legality, of course. But on the reactionary side Kavanaugh would vote in favor of the President, for sure, for he has written about an expansive view of Presidential power, one of the main reasons trump picked him. Thomas, who got even to the Right of Scalia on an occasion or two, probably would also and so would Alito. Gorsuch would also likely vote in favor of the man who gave him the seat almost solely on the position he takes on criminalizing abortion choice. And so that would leave it up to John Roberts (OMG) to determine whether or not the United States turns down the fascist road sooner rather than later.

And would Ann Coulter, who likely got into this one at first blush (if she ever does) just because she has been out of the limelight for so long, like that outcome. She might even end up with a seat in the new fascist cabinet.

Oh yes, one last point. Would Trump actually obey a negative Supreme Court decision? Or might he, as did a fictional Far-Rightist President in my 1996 book "The 15% Solution," challenge the decision of Chief John Marshall in the famous case, "Marbury v. Madison." That was the one that gave the Supreme Court its overarching review power of the actions of both the Legislative and Executive Branches that is not to be found explicitly stated in the Constitution. Only by following the "if-then-if-then" pathway that Marshall did does one get there. Could be challenged.

Postscript on the abandonment of the Intermediate Nuclear Forces treaty. This move was probably cleared well in advance with Trump's handler, Vladimir Putin (perhaps in one of those "side meetings" for which no records for the U.S. side exist). Both capitalist countries are heavily dependent on military spending to maintain their respective economies. What better way to do that by starting a new nuclear arms race?

Steven Jonas, MD, MPH, MS is a Professor Emeritus of Preventive Medicine at StonyBrookMedicine (NY) and author/co-author/editor/co-editor of over 35 books. In addition to his position on OpEdNews as a "Trusted Author," he is a Senior Editor, (more...)
Related Topic(s): Democrats; Far-right; Fascism; Hitler; Presidency; Trump And Putin; Trump Appointee; Trump Mexico Wall; Trump Predations; Trump Putin Summit; (more...) Trump Racist; Trump Wall Speech; Trumpism, Add Tags  (less...)
Add to My Group(s)
Go To Commenting
The views expressed herein are the sole responsibility of the author and do not necessarily reflect those of this website or its editors.