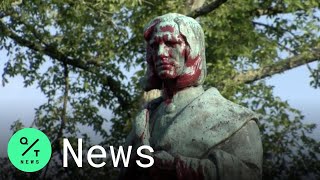 Statue of Christopher Columbus in Richmond, Virginia torn down by protesters and tossed into nearby lake

This morning there was a picture of protesters tearing down the statue of Christopher Columbus in Richmond, Virginia's Byrd Park yesterday setting it on fire, spitting on it then throwing it into a nearby lake.

Seeing it brought back some personal reflections I've had in the past of what America truly is. What is our true legacy?

The reality is from the time of Columbus, America was built on the genocide of the indigenous peoples and on the backs of black people brought here from Africa, sold off and used as slaves. That's our true legacy.

The lands of the continent were in fact stolen from what our government called "savages". They weren't "civilized" so what do you do with savages you annihilate them and throw the survivors into "gulags", what we call reservations, another innocent sounding term that cloaks the reality of their hard scrabble existence.

So what is our true heritage? Not so honorable.

Retired. The author of "DECEIT AND EXCESS IN AMERICA, HOW THE MONEYED INTERESTS HAVE STOLEN AMERICA AND HOW WE CAN GET IT BACK", Authorhouse, 2009
Related Topic(s): America; Genocide; Government; History; Hypocrisy; Legacy; Protester; Slavery; Theft, Add Tags
Add to My Group(s)
Go To Commenting
The views expressed herein are the sole responsibility of the author and do not necessarily reflect those of this website or its editors.