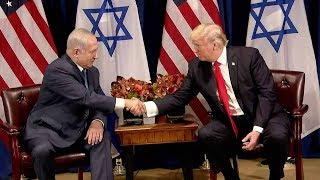 From youtube.com: Israeli PM: The alliance between America and Israel has never been stronger US President Donald Trump expressed his hopes for a peaceful settlement to the Middle East crisis again on Monday as he met Israel's Prime Minister Benjamin
(Image by YouTube, Channel: CGTN)   Details   DMCA

Two years of Donald Trump and Benjamin Netanyahu as a Middle East peacemaking team appear to be having a transformative effect -- and in ways that will please neither of them.

The American public is now evenly split between those who want a two-state solution and those who prefer a single state, shared by Israelis and Palestinians, according to a survey published last week by the University of Maryland.

And if a Palestinian state is off the table -- as a growing number of analysts of the region conclude, given Israel's intransigence and the endless postponement of Mr Trump's peace plan -- then support for one state rises steeply, to nearly two-thirds of Americans.

But Mr Netanyahu cannot take comfort from the thought that ordinary Americans share his vision of a single state of Greater Israel. Respondents demand a one-state solution guaranteeing Israelis and Palestinians equal rights.

By contrast, only 17 per cent of Americans expressing a view -- presumably Christian evangelicals and hardline Jewish advocates for Israel -- prefer the approach of Israel's governing parties: either to continue the occupation or annex Palestinian areas without offering the inhabitants citizenship.

All of this is occurring even though US politicians and the media express no support for a one-state solution. In fact, quite the reverse.

The movement to boycott Israel, known as BDS, is growing on US campuses, but vilified by Washington officials, who claim its goal is to end Israel as a Jewish state by bringing about a single state, in which all inhabitants would be equal. The US Congress is even considering legislation to outlaw boycott activism.

And last month CNN sacked its commentator Marc Lamont Hill for using a speech at the United Nations to advocate a one-state solution -- a position endorsed by 35 per cent of the US public.

There is every reason to assume that, over time, these figures will swing even more sharply against Mr Netanyahu's Greater Israel plans and against Washington's claims to be an honest broker.

Among younger Americans, support for one state climbs to 42 per cent. That makes it easily the most popular outcome among this age group for a Middle East peace deal.

In another sign of how far removed Washington is from the American public, 40 per cent of respondents want the US to impose sanctions to stop Israel expanding its settlements on Palestinian territory. In short, they support the most severe penalty on the BDS platform.

And who is chiefly to blame for Washington's unresponsiveness? Some 38 per cent say that Israel has "too much influence" on US politics.

That is a view almost reflexively cited by Israel lobbyists as evidence of anti-semitism. And yet a similar proportion of US Jews share concerns about Israel's meddling.

In part, the survey's findings should be understood as a logical reaction to the Oslo peace process. Backed by the US for the past quarter-century, it has failed to produce any benefits for the Palestinians.

But the findings signify more. Oslo's interminable talks over two states have provided Israel with an alibi to seize more Palestinian land for its illegal settlements.