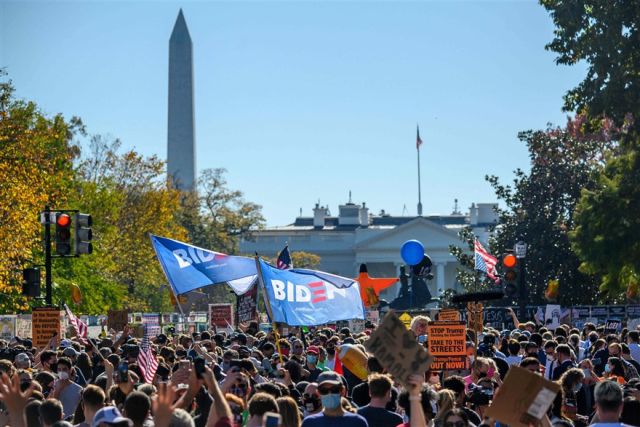 We got off lucky. Four more years of Trump might have killed the Great American Experiment.

It has taken me a few days to sort through the feelings I've had since Joe Biden won the 2020 presidential election. There was relief, of course. But more. When I read that Biden had finally been projected as the winner, four days after the election, it felt as if a huge weight I didn't know I was carrying had been lifted off my shoulders. That's apparently how worried I was about the future of this country.

I do not state this lightly: No president in my lifetime, not even Richard Nixon, has done more to damage the basic foundations of this nation than Donald Trump. For point of reference, Franklin Delano Roosevelt was president when I was born.

Trump has not done it alone, of course. He has had the willing, cowering support of most of the Republican Party, top to bottom, in his assault on decency, democracy, and the rule of law. He has had the fawning, self-serving support of white Evangelical grifters, who convinced their followers to pray for Trump and donate to their always-needy churches, to forget the hypocrisy and immorality of it all. He has had the angry, armed support of rejuvenated, suddenly hopeful, groups of white supremacists. The KKK credo ("America First") and Nazi flags had a rebirth, thanks to Trump. And he had the unwavering support of millions of seemingly ordinary Americans who I'm sure would deny vigorously that they had any racist, bigoted, misogynistic bones in their body or that they were too lazy or too embarrassed to find out if those conspiracy theories, like much of what Trump said, were lies that fed their pre-conditioned biases.

Harsh? I think not. Just look around. It's still going on. But the thing is, this time the rest of America isn't buying it. The rest of America voted overwhelmingly for a return to sanity, competence, compassion, truthfulness, and respect for the law in the Oval Office. And state election officials have performed their duties in a professional manner, making Trump's claims of fraud sound ridiculous and desperate. To be sure, many of his followers still claim "it's not over," but thousands of Americans danced in the streets when Trump lost, because they knew they were free of the menace of the man who broke bread with dictators, insulted allies and called American veterans "losers."

We got off lucky. Yes, we endured four years of arrogance and paralyzing incompetence in the White House, culminating with Trump's criminally negligent response to the COVID-19 virus, but we also learned some valuable lessons:

We got off lucky, America. It could have been far worse, as Germans well know. Authoritarianism and blind allegiance to a power-driven, truth-hating leader lead to fascism. But Trump's incompetence ultimately undid him, as it has always done before. Whatever happens to him and his many enablers, there is much healing to do for America and there will be resistance. But now at least we know what we didn't know about ourselves and our 244-year-old system of government, though it bent, eventually held up. With some adjustments, beginning with the Biden administration, hopefully we won't have to rely on luck to survive in the future.