US President stirs up a hornet's nest with his press conference alongside his Russian counterpart, but it seems that no "grand bargain" was struck on Syria, and on Iran they appear to strongly disagree 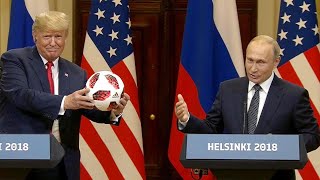 The Cold War is a thing of the past." By the time President Putin said as much during preliminary remarks at his joint press conference with President Trump in Helsinki, it was clear this would not stand. Not after so much investment by American conservatives in Cold War 2.0.

Russophobia is a 24/7 industry, and all concerned, including its media vassals, remain absolutely livid with the "disgraceful" Trump-Putin presser. Trump has "colluded with Russia." How could the President of the United States promote "moral equivalence" with a "world-class thug"?

Multiple opportunities for apoplectic outrage were in order.

Trump: "Our relationship has never been worse than it is now. However, that changed. As of about four hours ago."

Putin: "The United States could be more decisive in nudging Ukrainian leadership."

Trump: "There was no collusion... I beat Hillary Clinton easily."

Putin: "We should be guided by facts. Can you name a single fact that would definitively prove collusion? This is nonsense."

Then, the clincher: the Russian president calls [Special Counsel] Robert Mueller's "bluff," offering to interrogate the Russians indicted for alleged election meddling in the US if Mueller makes an official request to Moscow. But in exchange, Russia would expect the US to question Americans on whether Moscow should face charges for illegal actions.

Trump hits it out of the park when asked whether he believes US intelligence, which concluded that Russia did meddle in the election, or Putin, who strongly denies it.

"President Putin says it's not Russia. I don't see any reason why it would be."

It was inevitable that a strategically crucial summit between the Russian and American presidencies would be hijacked by the dementia of the US news cycle.

Trump was unfazed. He knows that the DNC computer hard-drives -- the source of an alleged "hacking" -- simply "disappeared" while in the custody of US intel, FBI included. He knows the bandwidth necessary for file transfer was much larger than a hack might have managed in the time allowed. It was a leak, a download into a flash-drive.

Additionally, Putin knows that Mueller knows he will never be able to drag 12 Russian intelligence agents into a US courtroom. So the -- debunked -- indictment, announced only three days before Helsinki, was nothing more than a pre-emptive, judicial hand grenade.

Related Topic(s): Trump And Putin; Trump Putin Press Conference; Trump Russia Connection, Add Tags
Add to My Group(s)
Go To Commenting
The views expressed herein are the sole responsibility of the author and do not necessarily reflect those of this website or its editors.