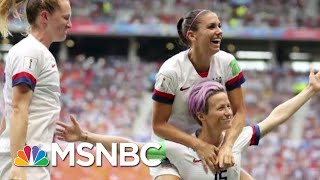 The feel-good story of the past weekend was:

Clearly, the women's soccer team repeating as world champions is the hands-down reason to celebrate in the "We're still number one!" category. Ever since Brandi Chastain tore off her jersey after scoring the winning goal against China to clinch the world championship in the Rose Bowl in 1999, the team has been performing at a level far beyond the recognition, respect and rewards due it. That one was its second world title and the current one is its fourth. The tournament has only been held eight times and the U.S. team has won half the championships, finished second once and third the other three times. That's the kind of performance Americans like to brag about ... then forget about.

These young athletes won't let us forget. Having far exceeded the success of the men's national soccer team, the women's team deserves, not equal compensation with the men, but compensation commensurate with their success. Pay them.

The Epstein story is as sordid as the soccer story is salubrious, yet it also stirred a feeling in me and others, I believe of, "Yes! Good! Terrific! About time! Get the bastards!"

That both events happened on the same day, that both involve young females and that, as seemingly everything these days, both have connections to Donald Trump, will seem to some as no big deal, or a coincidence. I'm going with synchronicity. The universe is setting some things straight.

Trump simply could not behave presidentially when Megan Rapinoe, captain and star of the women's soccer team, said during World Cup competition that there was no way she would go to the "f****ng White House" if the team was invited. She was responding to a reporter's question. She's not thrilled with Trump's views on women, gays and lots of other things.

Trump responded on Twitter: "Megan should WIN first before she TALKS! Finish the job! Megan should never disrespect our Country, the White House, or our Flag, especially since so much has been done for her & the team."

Well, Megan finished the job, winning awards for top scorer and most valuable player as well as the World Cup. Following the victory, which was celebrated with added gusto by Americans who saw it as a perfect put-down to Trump, Rapinoe added, "We say what we feel. All of us really, I know that my voice sometimes is louder, but in meal rooms, in conversations, everybody is in this together. We are such a proud and strong and defiant group of women."

New York City promised a parade in the canyon of champions and House Speaker Nancy Pelosi invited the team to The Capitol. Trump was silent on any invitation, not being a fan of strong and defiant women.