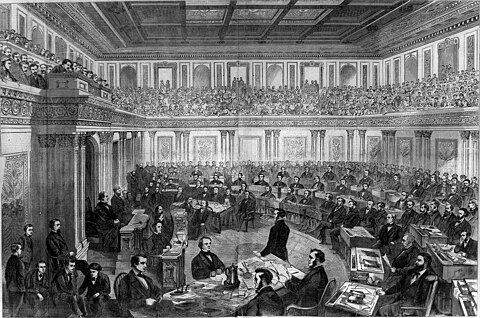 US Senator Lindsey Graham (R-SC) makes no bones about his position on the likely upcoming impeachment trial of US president Donald Trump. "I am trying to give a pretty clear signal I have made up my mind," he tells CNN International's Becky Anderson. "I'm not trying to pretend to be a fair juror here."

Well, okay, then. Graham has publicly disqualified himself as, and should be excused from serving as, a juror.

Republican politicians, including Graham, have spilled quite a bit of verbiage whining -- ineffectually and incorrectly -- about a lack of "due process" in the House segment of the impeachment drama.

Their errors on those claims are simple: Impeachment isn't a criminal prosecution, nor is a House impeachment inquiry a trial.

There won't be any "nature and cause of the accusation" for Trump to be "informed of" until the House passes articles of impeachment.

If impeachment was a criminal matter, he would be constitutionally entitled "to be confronted with the witnesses against him; to have compulsory process for obtaining witnesses in his favor, and to have the Assistance of Counsel for his defence" at trial. And in fact he will be treated as entitled to those things, even in the Senate's non-criminal equivalent.

In addition to those aforementioned items, the Sixth Amendment also mandates "an impartial jury."

If you're accused of armed robbery, your brother won't be allowed to serve on the jury at your trial. Neither will the bank teller who was ordered to stuff money in a sack at gunpoint, or the police officer who arrested you, or anyone else who's known to likely be prejudiced either way.

Is there any particular reason why the due process requirements Graham hails as paramount wouldn't mandate a similar standard for impeachment trials in the US Senate? I can't think of one.

In Senate trials of impeachment cases, the Chief Justice of the United States (in the current controversy, John Roberts) presides as judge.

Once the House passes articles of impeachment, Roberts should order his clerks to drop everything else and get to work examining the public statements of all 100 members of the US Senate. His first order of business at the trial should be to excuse any and all Senators who have publicly announced their prejudices on Trump's guilt or innocence from "jury duty."

Yes, Democrats too. That should come as a relief to several Democratic presidential aspirants who would probably rather spend their time on the 2020 campaign trail than as impeachment jurors.

The Constitution only requires the votes of 2/3 of US Senators PRESENT at the trial to convict, so excusing those members who have announced their prejudice and partiality wouldn't prevent a valid verdict.

Would "impeachment voir dire" render future impeachments more "fair" and less "partisan?" Probably not. But it would at least spare us some theatrics from the likes of Lindsey Graham by making pretrial silence a condition of participation.