Although I write about international affairs, I keep an eye on the home front to catch events that affect the Big Picture. Suddenly, (it seems) several similar impressions are forcing me to pay closer attention.

President Obama last week confessed that we (the sharpest minds of the most powerful nation the world has ever seen) don't have a strategy to confront ISIS, forcing retired generals recycled as news program analysts to hedge their bets: "We will not put boots on the ground unless we have to." (Isn't that - officially at least - always why we put boots on the ground?) This morning RT showed a clip of Kerry telling the Senate Foreign relations committee that he would only divulge the names of our 'forty some' allies in the upcoming campaign against ISIS behind closed doors. The Europeans, with significant Arab populations, are keeping their noses to the ground, although the French will carry out some air-strikes, so what is he talking about?

According to The Guardian click here, "none [of our 'allies] has publicly committed to military action -- although several, including Saudi Arabia and the United Arab Emirates, are believed to have privately indicated willingness to participate in air strikes. Turkey, the only Muslim member of Nato, has resisted pressure to join in air strikes or allow its bases to be used for strikes." (The reason being that it is the conduit for 'volunteers' crossing into Syria, as shown here.)

To be sure, the Ebola outbreak in Africa gives us an opportunity to show that our military can be used for humanitarian purposes. We're sending an under-employed army to build and organize stuff, a two-fer given China's large, peaceful footprint there - not to mention Cuba's, neither of which you will find in the MSM. Meanwhile, we are keeping our fingers crossed that Ebola will not turn into the first world-wide plague brought on by climate change, coming as it does on the heels of the just-reported hottest month of August on record - or perhaps it's the second hottest, there's little difference. (The report claims it would be worth the investment to do something about climate change, confirming, if need were, that profits have been preventing our government from requiring big biz to act.)[tag]

While the preceding events are unsurprising, the third subject of this piece is, to me at least: although it will seem trivial, it is a persistent impression that The New Yorker Magazine is fading.

A friend kindly shares her copies with me, so I usually inherit several issues at once. Where not so long ago their arrival guaranteed an hour of laughs (cartoons being the first things I've always looked at), and some fine, informative writing, of late the pages do not draw me in. The cartoons, especially, seem to be saying: "This is the best I can do."

For those readers who may never have encountered the publication, know that it 'debuted' (in the words of Wikileaks) on February 21, 1925. By way of comparison, Harpers launched in June, 1850, the only older American magazine being The Scientific American, founded in 1845. Is it a coincidence that the three magazines' ages coincide with their 'seriousness'? Since my return to the U.S. in 2000, I've consistently found Harpers' to be the best magazine around, with incisive think pieces, in-depth reporting and photographic essays on places far and wide. During those same years, what gradually became intolerable to me about The New Yorker was its slick, obviously expensive advertising, however many learned and perspicacious writers alternated with those of sophisticated wit (for example Jonathan Foer and Louis Menand, Adam Gopnik being in a class apart).[tag] 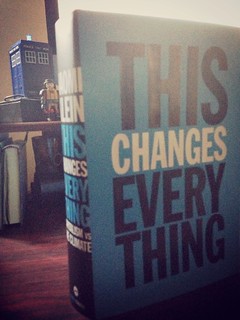 Are we simply witnessing a downturn in the magazine's fortunes due to an unfortunate coincidence of uninspired editing and dropping sales (at a time when, however, the 1% is doing fine"..), or does the zeitgeist simply no longer support this kind of endeavor? Progressive America's best-known investigative reporter Seymour Hersh fell out with the New Yorker where he had been a regular contributor in 1993 last year, underlining the the New York liberal elite's allegiance to the Democratic Party that has continued uninterrupted since the presidency of Franklin Roosevelt.

Maybe it's inevitable that when the nation that claims to be the only one capable of successfully confronting the world's problems can no longer even pretend to cope - in large part because part of its intelligentsia's choice of bread over conscience - a publication that has spanned the 'American century' should have become a mere shadow of its former self - or perhaps a hologram, in which a light field is recorded and later reconstructed when the original light field is no longer present.

This may be how a civilization testifies that it is dying.

Related Topic(s): Advertising; America; Arab; Climate; Ebola; Guardian; Military; Muslim; NATO; Presidency; (more...) Retired; Syria; Volunteers; Zeitgeist, Add Tags  (less...)
Add to My Group(s)
Go To Commenting
The views expressed herein are the sole responsibility of the author and do not necessarily reflect those of this website or its editors.