The award-winning foreign policy journalist Robin Wright published a portrait of Iranian nuclear negotiator Javad Zarif in the May 20th issue of The New Yorker that is a set piece for high-level yet misleading journalism. Wright has extensive experience covering the Middle East and has written or edited several books on the subject. However she illustrates what many progressive readers have noticed as a recent rightward tilt to both the New Yorker and The New York Review of Books, an example of the latter being Timothy Snyder's slant on events in Ukraine.

The first thing you notice about Wright's article is that it carries a negative title: "The Adversary". Then a subtitle that appears to contradict it: "Is Iran's nuclear negotiator Javad Zarif for real?" This sets the tone for the entire piece, in which the writer struggles to maintain American journalism's highest - but illusory - standard of 'objectivity' and its corollary 'equal time', never letting her own opinion transpire.

When the new Iranian negotiator, appointed by a new President, tweeted 'Happy Rosh Hashanah', Nancy Pelosi tweeted back: "The New Year would be even sweeter if you would end Iran's Holocaust denial, sir". Zarif responded: "Iran never denied it. The man who was perceived to be denying it is now gone. Happy New Year."[tag] 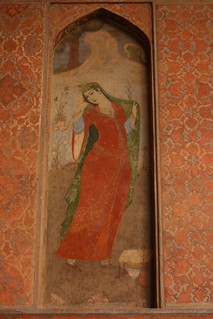 Fresco : A Thousand and One Nights for days of negotiating.
(Image by blondinrikard)   Details   DMCA

Instead of giving him credit for this, Wright tells us that Kerry and Zarif, having met four times, now call each other by their first names, a breakthrough made possible by the fact that the Iranian diplomat spent his college years in the United States. (The second breakthrough was that the representatives involved in the six party negotiations to reach a deal over Iran's nuclear activity now share news of their respective families.)

And yet Wright slides from the sub-title, 'Is the negotiator for real", to "Is the process for real and can it succeed?" referring to Iranian hardliners gathered for a 'We're worried' conference at the US Embassy against concession that ends with "A woman in black chador carried a placard stating 'Our nuclear rights are not for sale.'" Did she do this in front of the Embassy', or did she sit in the conference room with her placard?

Further muddying the waters, the following paragraph states: "For many Iranians, a nuclear deal is about a lot more than nukes. It would remove the threat of regime change by securing (securing"..) the Iranian government as the legitimate representative of the iranian people." This sentence implies: 1) That after twenty-five years, the regime has not been able to establish itself as legitimate, which is patently absurd, and 2) That most citizens of this highly nationalist country are willing to 'sell their nuclear rights', which is also absurd. The paragraph ends with: "But it might also open Iran to the outside world in ways that affect the internal balance of power." This positive-sounding statement in fact portends US-inspired regime change followed by IMF shock and awe.

Diane Feinstein's appraisal of Zarif would appear to confirm Washington's hope that he could be enlisted in the effort: "He is thoughtful. He is real. He wants to help his people and lead them in a different direction." Chuck Hagel, who also met Zarif when he was Iran's UN ambassador, is less threatening: "He can play an important role in helping to resolve our significant differences with Iran peacefully." And yet, after telling us that even our former Ambassador to Israel, Martin Indyk, told Zarif he would be missed at the UN, Wright apparently felt the need to correct any positive impression the reader might get from this:

"Yet in January Zarif met with Nasrallah in Lebanon" at the grave of a military commander who had been 'linked' to the 1983 bombing of the US militayr barracks in Lebanon. Diplomats in most parts of the world - including those of US allies - would agree with Zarif, who says: "In order to be able to practice dialogue, you need to be able to set aside your assumptions and try to listen more than you want to talk".I have disagreements with some [people] and more agreements with others. But that doesn't mean I can't listen to those I disagree with."

You're not likely to hear a remark like that coming from an American political or diplomatic figure - much less a mainstream journalist. Yet Robin Wright cannot let this statement go by without framing it: "Some American critics don't buy this. There are worse Islamic revolutionaries out there, but make no mistake, he's an Islamic Revolutionary (meaning an ally of Nasrallah)." Quoting a former CIA officer now ensconced in a think tank: "[Zarif] understands the Islamic Reovlution as being incompatible with the United States." Incompatible with the all-knowing, exceptionalist United States! And he continues: "Only in the Byzantine (used as a slur) world of Islamic politics do the differences between Zarif and what some call hard-liners gain importance."

Scope that out! This guy is declaring that if you're a revolutio-nary, you're automatically 'a hard-liner'. Were there not degrees of 'hardness' among American revolutionaries? Did the Founding Fathers all share the same degree of ferocity vis a vis the British Empire and King George, whom they had decided to no longer recognize as their ruler? History books out the window!

After noting that Zarif had accepted an interim nuclear deal, Wright feels compelled to note that Obama estimates the chances of ultimate success at only 50/50. Her off-hand way of acknow-leging that the Ford administration approved the Shah's plan to buy twenty nuclear reactors, a deal that was good for American business, adding that since that time runaway population growth has increased Iran's need for alternatives to oil, doesn't even suggest that these facts would justify Iran's insistence on having a nuclear program.

This carefully researched article constantly defeats any tendency the reader might have toward sympathy with 'the adversary'. After enumerating the suffering caused - and still vividly remembered - by the Iran-Iraq war, in which, by the way, we backed Iraq, in that wonderful balancing of pros and cons, good and bad that has been perfected by American journalists Wright declares: "Iran is the world's only constitutional theocracy, and the only place in Islam's fourteen centuries (place in centuries?) where clerics have ruled a state. For the past thirty-five years, Iranians have also felt exceptional - and exempt from international norms - because of the country's claim to sacredness."

As a Middle East expert Wright must know that Iran doesn't consider itself to be sacred; rather, like religious people everywhere, Iran's leaders consider God to be sacred. Muslims believe that humans have an obligation to treat other humans with dignity and respect because that is what God demands. Yet Wright leans on a current catchword: America is exceptional because as God's 'city on the hill', it is founded on 'democratic principles', while Iran only considers itself to be exceptional because it is ruled by religious rather than man-made laws, which in fact trump God's laws. This sleight of hand allows Wright to uncritically quote White House advisor Ben Rhodes, when he elucidates Obama's take on Iran with these words: "They've got to decide whether we are the Great Satan or whether we are their ticket into the community of nations."

Wright skillfully hews to the diktats of 'objectivity', defined as presenting 'both sides of the story' even when one side is patently absurd or inaccurate. At the time of Watergate, when the press still touted its role as watchdog, journalists had to be careful to not introduce 'opinion' into 'news' stories, which had to 'stick to the facts'. Opinion was reserved for editorials. But what about 'think pieces' like Wright's? Is Seymour Hersh the only journalist permitted to analyze - which requires a point of view, or opinion? (And how many journalists have had the guts to follow Dylan Ratigan who delivered a Hail Mary rant on MSNBC, knowing it meant the end of his career and is now he is seeking solutions to global problems with veterans?)

SOP for meeting the sacred obligation of 'objectivity' in pieces such as Wright's is to consistently mention attenuating circumstances or explanations for an adversary's motives or 'unacceptable' behavior (such as Iran's dire need for energy due to a 50% increase in population over the last few decades), in a way that ensures the reader will not be tempted to connect the dots. Once an adversary has been defined as indulging in condemnable behavior, or even possessing some characteristic that lies outside the American definition of a 'civilized society' (currentlly referred to as 'the community of nations'), nothing can transform that adversary into an acceptable 'other', although that is what the conduct of international affairs must be about.

Until journalists reclaim their watchdog function, even New Yorker readers will fail to question the policies being carried out in their name.

STAY IN THE KNOW
If you've enjoyed this, sign up for our daily or weekly newsletter to get lots of great progressive content.
Series: "Deconstructing the Media"