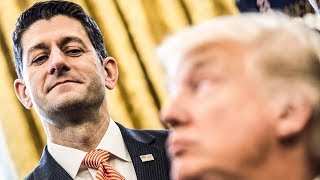 House Speaker Paul Ryan attempted to defend Donald Trump's behavior after the Comey hearing by saying that the President is just new to this job ...
(Image by YouTube, Channel: The Ring of Fire)   Details   DMCA

Of all the excuses Republicans have come up with for the words and actions of Donald Trump, leave it to feckless Paul Ryan to come up with the dumbest. And Ryan is two heartbeats from the presidency.

Ryan's excuse (I paraphrased for emphasis) came, of course in response to questions about his reaction to the narcissist-in-chief's (NIC's) pressuring former FBI DIrector James Comey to drop an investigation of Michael Flynn, whom Trump had just fired as his national security adviser. "He's a good guy," Comey said the NIC told him in a private meeting. Testifying to a Senate committee, Comey said he agreed with Trump. But he also knew Flynn had neglected to mention several meetings with Russian officials while he was part of the Trump transition team. So, no, Comey, said, he could not "let it go."

More to the point, Comey told the senators he was uncomfortable that the NIC had even asked the then-FBI director -- traditionally an independent official -- to drop an investigation and, furthermore, asked for a pledge of "loyalty" from him. All in private conversations. Inappropriate in spades. Possibly illegal.

Rookie mistake, as far as Ryan is concerned. To quote him precisely: "He's new to government, and so he probably wasn't steeped in the long-running protocols that establish the relationships between DOJ, FBI and White Houses. He's just new to this."

Is that an appropriate excuse for the president of the United States? Ryan was asked. Perhaps not, he acknowledged, adding, "It's just my observation."

FIne. Here's my observation, Mr. Speaker of the House. I like to know that the person widely regarded as leader of the free world has at least some working familiarity with the rules of the road -- the protocols of the office, diplomacy, a sense of history, the basic do's and don'ts of the job. Also, respect for the law of the land. Stuff like that.

"Let's Make a Deal'' was a TV show, not a meeting of NATO countries. "The Godfather" was a novel, then a movie in which Marlon Brando asked a bunch of people for "loyalty," but they weren't in an Oval Office darkened by closed blue curtains, which, on other occasions, might afford a wary FBI director a place to try to hide from the NIC.

There are certain times when "he's new on the job" doesn't cut it. I recently underwent surgery for fractures of my left knee and right wrist. Same accident. The surgeons said they were going to perform the operations simultaneously, since they were on opposite sides of the body and they wouldn't get in each other's way. Only one anesthesia that way, they said.

Sounds good, I said. You guys ever do this before? I asked. Sure, the knee guy reassured me. Is he any good? I asked the nurses. He operates on the Mets' pitchers, they said. OK, I said. No rookie. Knee and wrist are mending well.

"I think you may have broken the law," the DA told me after he read the article in the paper. He was smiling, but I was mortified. My inexperience might have tipped someone off, blown the DA's case " put me before a grand jury?

I was lucky. The DA had his guy and was understanding. He knew I was "new on the job" and had no malicious intent. Still, I was embarrassed and apologized profusely and paid close attention to the rules of the road from thereon. I did not deny or excuse what I had done. I learned a lesson.

This was in a small town in upstate New York, not in the White House. I was maybe 25 years old, fresh out of college, six months of infantry training and a year as a police reporter. Trump is 70 years old and, to hear him tell it, a successful man of the world. The artist of the deal. A brand name. President of the @#$%# United States!