And so, people are digging for their own backyard water supplies. Officially, 40% do. But it is a lie, like all local "massaged" statistics. Much more than 50% do. The rivers are clogged. Nothing works, except graft and privately-owned commercial activities. Jakarta is irreversibly going down the drain; literally. And no one does anything.

Why? Because there is no business, no profits in saving the capital, and its 30 million people. Because the Indonesian system has lost all morals. There is no enthusiasm, no zeal. Just graft.

The elites should be forced to save Jakarta, instead of being allowed to escape like rats to Borneo. Because that horror that they created, is their personally manufactured horror! In fact, all cities and villages, all over the archipelago, are. Let them clean it with their own hands, or at least with the hundreds of billions that they have stolen.

But they are aiming to make huge profits even from disaster, even from their flight. And no one is stopping them. As there is no opposition in Indonesia, and no democracy.

It all can be done, reversed, but it will not. The nation could mobilize. Rivers could be cleaned. The water supply re-nationalized and clean water could be pumped, for free, into all dwellings. Private water pumps could be banned, confiscated and destroyed: in the name of the people. Huge condominiums in North Jakarta could be declared illegal and dynamited, as is being done even in Kerala, India. Slums could be converted to public parks and people relocated far away, to the outskirts, and given both housing and public transportation (better solution than letting them die in future floods). Powerful walls would have to be erected, to protect the capital.

No "new city" for those few chosen ones! They should all stay, and eat crap, together with other citizens. And fight for their capital! Until final victory.

No huge, major city of such importance and size, anywhere on our planet, has ever been ruined and abandoned, as Jakarta is being right now.

I have lived or worked in approximately 160 countries on earth, on all continents, but I never saw such moral downfall as in Indonesia.

People are squatting at almost every corner, next to clogged open sewers, smoking poisonous clove cigarettes, commenting, pointing fingers at passer-by, and many of them basically doing nothing. Laughing. It is insulting, unhappy laughter. Put them to work! Make them fight for their city. 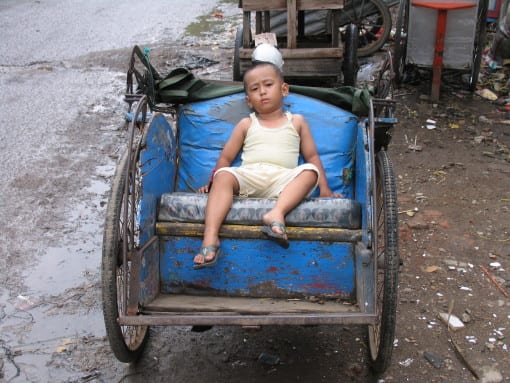 Like this, nothing can ever change. Instead of huge public works, instead of the tremendous mobilization of millions of people, which was something usual during the socialist era of Indonesia, all this nation is doing now is falling deeper and deeper into religious traps, into renewed witch-hunting of "Communists", and atheists. That's what the West instructed the Indonesian elites to do - like in Afghanistan - in order to purge all progressive, socialist thoughts.

Related Topic(s): Borneo; Corruption; Corruption; Cynicism; Environment; Indonesia; Jakarta; Megalomaniac, Add Tags
Add to My Group(s)
Go To Commenting
The views expressed herein are the sole responsibility of the author and do not necessarily reflect those of this website or its editors.