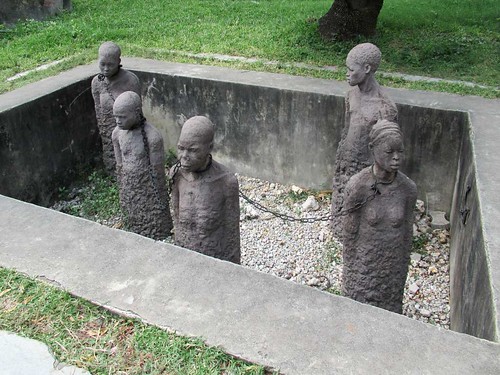 In the time before abolition, slave owners would cut the hamstrings of slaves so they couldn't run away. In a way, American workers who are in jobs they hate, that they are forced to stay in to keep their health insurance, are also hamstrung. They can't run away either.

There are an estimated forty million slaves in the world. UNESCO describes slavery as "unable to leave employer." I wonder how many tens of millions of Americans are stuck in jobs because they'd lose health insurance. Should they be added to the slave count?

When Obamacare went on line, there were some people who were joyfully able to quit jobs they hated--because the jobs were oppressive, because the employer or the company was abusive, because they couldn't stand the work.

This "hamstringing" of employees through health insurance helps corporations retain low paid, unhappy employees, especially those with family members with health problems, as virtual indentured servants. A mother or father can't leave a job if they have a child with a chronic illness, or a spouse with an illness that's potentially fatal if not treated.

This week, Paul Ryan, the Republican Speaker of the House of Representatives made it clear that he is on board with the bi-partisan agreement on funding the part of Obamacare that Trump de-funded. This is part of the process of castrating the American worker.

This is a continuation of the effort to keep the middle class and the poor so close to the edge of poverty, living paycheck to paycheck.

There is a better way. It starts with, as Nobel Peace Prize winner Muhammad Yunus say shifting from an economics of selfishness to an economics of selflessness. And, Yunus say, capitalism must shift from the aim of companies being to extract maximum profit to aiming to help people and solve problems.

The aversion to programs that support the great masses of people is a neoliberal concept, created by libertarian heroes Friederich Hayek,

Ludwig von Mises and Ayn Rand, then embraced and popularized by Milton Friedman. Neoliberal philosophies include getting rid of all regulations that protect workers, the poor, nature, democracy and justice. They believe that the system should be set up to maximize benefits for the wealthy, that heirs of the wealthy deserve their inheritances and should be free to use them any way they want, even though they are not earned.

The left should MUST expose neoliberals and neoliberalism and get the middle class to see it as more of a threat to Democracy, justice and equality than any of the targets the powers that be have distracted us with the in the past.

Neoliberals control the Democratic and Republican parties. Trump's cabinet is full of them, as were Obama's and Bush's.

The reality is, neoliberals believe in an economic system and capitalist model that enshrines what amounts to slavery. Tell everyone you know about neoliberalism and who embraces it.

George Monbiot proposes that we need a new political story that supports the masses and which characterizes neoliberal philosophies as the selfish, toxic ideas that they are. We need politicians who will embrace those new stories and run against the corporate owned incumbents in both parties.

Related Topic(s): Employer Provided Health Insurance; Health Insurance; Poverty; Slavery, Add Tags
Add to My Group(s)
Go To Commenting
The views expressed herein are the sole responsibility of the author and do not necessarily reflect those of this website or its editors.

STAY IN THE KNOW
If you've enjoyed this, sign up for our daily or weekly newsletter to get lots of great progressive content.
Series: "authoritarianism Patriarchy Hierarchy"