In 2008, an extremely wealthy member of the bin Laden family aimed to build a bridge across the mouth of the Red Sea from Yemen to Djibouti. The project could generate hundreds of billions for investors, and quicken the process of exploitative modernization; but it would also require building railways and roads where there are only villages now. People living along the coastline of the Red Sea would be in the way.

Since 2015, fighting has been concentrated in this area, called the Tihama. Control of the coastline would also allow financial takeover of potentially profitable Yemeni fisheries. Blumi says billions of dollars of annual income are at stake, noting with irony that a war causing starvation is being waged, in part, to gain control over food assets.

A recent United Nations report says that Yemen is now "on course to become the world's poorest country" with 79 percent of the population living under the poverty line and 65 percent classified as "extremely poor." The Yemen Data Project estimated 600 civilian structures have been destroyed, monthly, in Yemen, mostly by airstrikes.

"Staple food items are now on average 150 percent higher than before the crisis escalated," says a 2019 report by the Norwegian Refugee Council. "Teachers, health workers and civil servants in the northern parts of the country haven't been paid in years," according to the same report.

Mainstream media reports could convince concerned onlookers that Yemenis have been particularly vulnerable to violence and war because they are socially and economically backward, having failed to modernize. Blumi insists we recognize the guilt of financial elites from multiple countries within and beyond the Gulf states as well as institutions within the World Bank, the IMF and the UN. It's wrong to blame "80 percent of a country's population currently being starved to death"

Greta Thunberg continues calling us to join her on an unfamiliar, unprecedented, and arduous path to change course as our world careens toward terrifying devastation. We're offered a chance to resist destructive, albeit "modern" means of exploiting the planet's resources. A true strike for creativity, necessarily challenging militarism and greed, will help prevent the hellish work of destroying Yemen. 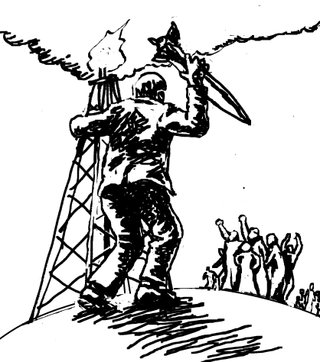 (Image by Cartoon by Sean Reynolds)   Details   DMCA
A version of this article was first published in The Progressive online magazine.