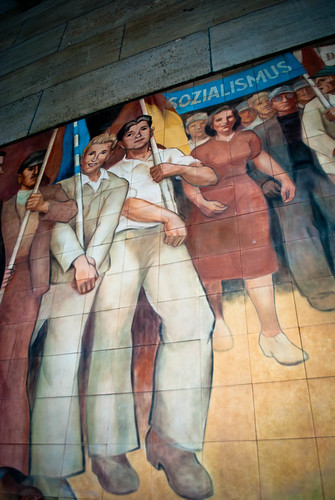 Over the last 200 years, socialism has spread across the world. In every country, it carries the lessons and scars of its particular history there. Conversely, each country's socialism is shaped by the global history, rich tradition, and diverse interpretations of a movement that has been the world's major critical response to capitalism as a system.

We need to understand socialism because it has shaped our history and will shape our future. It is an immense resource: the accumulated thoughts, experiences, and experiments accomplished by those yearning to do better than capitalism.

In my latest book, Understanding Socialism (Democracy at Work, 2019), I gather and present the basic theories and practices of socialism. I examine its successes, explore its challenges, and confront its failures. The point is to offer a path to a new socialism based on workplace democracy. Here are 10 things from this book that you should know.

1. Socialism is a yearning for something better than capitalism

Socialism represents the awareness of employees that their sufferings and limitations come less from their employers than from the capitalist system. That system prescribes incentives and options for both sides, and rewards and punishments for their behavioral "choices." It generates their endless struggles and the employees' realization that system change is the way out.

In Capital, Volume 1, Karl Marx defined a fundamental injustice exploitation located in capitalism's core relationship between employer and employee. Exploitation, in Marx's terms, describes the situation in which employees produce more value for employers than the value of wages paid to them. Capitalist exploitation shapes everything in capitalist societies. Yearning for a better society, socialists increasingly demand the end of exploitation and an alternative in which employees function as their own employer. Socialists want to be able to explore and develop their full potentials as individuals and members of society while contributing to its welfare and growth.

Socialism is an economic system very different from capitalism, feudalism, and slavery. Each of the latter divided society into a dominant minority class (masters, lords, and employers) and a dominated majority (slaves, serfs, employees). When the majority recognized slavery and feudal systems as injustices, they eventually fell.

The majorities of the past fought hard to build a better system. Capitalism replaced slaves and serfs with employees, masters and lords with employers. It is no historical surprise that employees would end up yearning and fighting for something better. That something better is socialism, a system that doesn't divide people, but rather makes work a democratic process where all employees have an equal say and together are their own employer.

2. Socialism is not a single, unified theory

People spread socialism across the world, interpreting and implementing it in many different ways based on context. Socialists found capitalism to be a system that produced ever-deepening inequalities, recurring cycles of unemployment and depression, and the undermining of human efforts to build democratic politics and inclusive cultures. Socialists developed and debated solutions that varied from government regulations of capitalist economies to government itself owning and operating enterprises, to a transformation of enterprises (both private and government) from top-down hierarchies to democratic cooperatives.

Sometimes those debates produced splits among socialists. After the Russian Revolution of 1917, socialists supporting the post-revolutionary Soviet Union underscored their commitment to socialism that entailed the government owning and operating industries by adopting the new name "communist." Those skeptical of Soviet-style socialism tended increasingly to favor state regulation of private capitalists. They kept the name "socialist" and often called themselves social democrats or democratic socialists. For the last century, the two groups debated the merits and flaws of the two alternative notions of socialism as embodied in examples of each (e.g. Soviet versus Scandinavian socialisms).

Early in the 21st century, an old strain of socialism resurfaced and surged. It focuses on transforming the inside of enterprises: from top-down hierarchies, where a capitalist or a state board of directors makes all the key enterprise decisions, to a worker cooperative, where all employees have equal, democratic rights to make those decisions, thereby becoming collectively their own employer.

3. The Soviet Union and China achieved state capitalism, not socialism

As leader of the Soviet Union, Lenin once said that socialism was a goal, not yet an achieved reality. The Soviet had, instead, achieved "state capitalism." A socialist party had state power, and the state had become the industrial capitalist displacing the former private capitalists. The Soviet revolution had changed who the employer was; it had not ended the employer/employee relationship. Thus, it was to a certain extent capitalist.

After initially copying the Soviet model, China changed its development strategy to embrace instead a state-supervised mix of state and private capitalism focused on exports. China's powerful government would organize a basic deal with global capitalists, providing cheap labor, government support, and a growing domestic market. In exchange, foreign capitalists would partner with Chinese state or private capitalists, share technology, and integrate Chinese output into global wholesale and retail trade systems. China's brand of socialism a hybrid state capitalism that included both communist and social-democratic streams proved it could grow faster over more years than any capitalist economy had ever done.

4. The U.S., Soviet Union, and China have more in common than you think

As capitalism emerged from feudalism in Europe in the 19th century, it advocated liberty, equality, fraternity, and democracy. When those promises failed to materialize, many became anti-capitalist and found their way to socialism.

RICHARD D. WOLFF is Professor of Economics Emeritus, University of Massachusetts, Amherst, and a Visiting Professor in the Graduate Program in International (more...)

Related Topic(s): Capitalism; FDR; Socialism; Socialism; Worker Cooperatives; Workers, Add Tags
Add to My Group(s)
Go To Commenting
The views expressed herein are the sole responsibility of the author and do not necessarily reflect those of this website or its editors.

10 Things You Should Know About Socialism