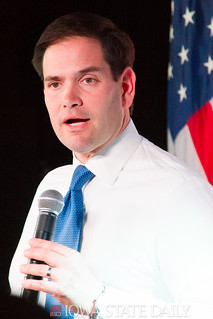 Marco Rubio
(Image by Max Goldberg)   Details   DMCA
rco Rubio is being positioned as a moderate alternative to Ted Cruz or Donald Trump. Baloney. His positions are extreme right. Consider these 10 facts about Rubio:

2. When asked about closing down mosques, Rubio said he wants to shut down "any place radicals are inspired."

3. He denies humans are responsible for climate change.

5. He wants to cut $4.3 trillion in spending, including funds from Medicare and other programs, essentially freeze federal spending at 2008 levels for everything except the Pentagon.

6. He wants a permanent U.S. presence in Iraq, and would end the nuclear deal with Iran, putting us on a path to war.

7. We have no way to know where he is on immigration because he's flip-flopped -- first working on legislation to regularize citizenship for undocumented immigrants, and now firmly anti-legalization.

8. He wants to repeal Obamacare.

9. He's against a woman's right to choose, even in cases of rape and incest.

10. Although elected to the Senate as a Tea Party favorite, he's now the establishment's favorite Republican. Among his donors are hedge-fund billionaire Paul Singer and the executives and PACs of Goldman Sachs, Wells Fargo, and Koch Industries.

Related Topic(s): Extreme Right; Marco Rubio; Republican, Add Tags
Add to My Group(s)
Go To Commenting
The views expressed herein are the sole responsibility of the author and do not necessarily reflect those of this website or its editors.