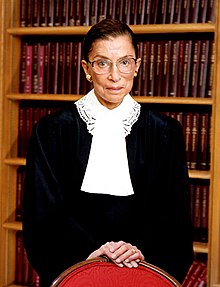 In her eulogy of Justice Stevens, who passed away in July at age 99, she remarked that she hoped to remain on the bench as long as her departed colleague. Achieving that goal would carry Ginsburg beyond the next presidential election. Should Trump be voted out of office, a Democratic president would get to name not only Ginsburg’s replacement, but most likely Justice Stephen Breyer’s successor as well: Breyer celebrated his 81st birthday on Aug. 3.

If Trump is reelected, or worse, Ginsburg otherwise leaves the bench before the election, the Court would lurch even more decidedly to the right. According to Axios, Trump is “saving” Ginsburg’s slot for 7th Circuit Court of Appeals Judge Amy Barrett. A staunch supporter of gun rights, Barrett is a devout Catholic and a favorite of social conservatives, who see her as delivering the long-sought final vote needed to overturn Roe v. Wade.