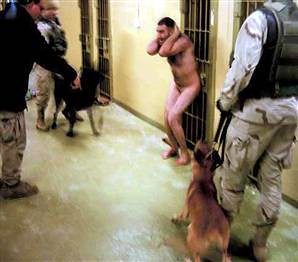 Photo of Abu Ghraib, Iraq prison suspect being tortured in 2004

Is there any doubt we are complicit in the wrongful path our country has taken?

We may not want to admit it but we have been complicit, essentially indifferent bystanders to-name it-our wrongful wars, occupations, indefinite detention, torture, $trillion a year in "defense" spending, over a $trillion in college student loan debt, a financial industry run amok whose machinations created the 2008 great recession, an electoral system completely corrupted by billionaires largesse that has both Republicans and Democrats beholden to them, just to name a few of the more blatant issues most Americans remain indifferent to.

We're no different than the "good" Germans in the 1930's who allowed Hitler come to power, initiate W.W.II and the Holocaust. Those are the same "good" Germans after the war pretended they had no knowledge of what happened in the death camps nearby.

Now our exceptional, entitled Americans could care less what is going on in this country, much less the world or anything about the plight of those less fortunate than themselves, absorbed as they are in their cult of the self.

Those who have lost jobs, forced from their homes through foreclosures, loss of savings and just scratching to get by are given a pass from this little critique but that certainly doesn't include some of the professional psychologists in the APA, American Psychological Association who sacrificed their integrity by working closely with and condoning torture committed at Guantanamo or those university professors accepting grants from the defense industry that benefits from endless war.

Retired. The author of "DECEIT AND EXCESS IN AMERICA, HOW THE MONEYED INTERESTS HAVE STOLEN AMERICA AND HOW WE CAN GET IT BACK", Authorhouse, 2009
Related Topic(s): Complicity; Detention; Occupation; Surveillance; Torture; Wars, Add Tags
Add to My Group(s)
Go To Commenting
The views expressed herein are the sole responsibility of the author and do not necessarily reflect those of this website or its editors.