Cross-posted from The Guardian
While US government lawyers persist in defending the menacing Section 1021 in court, a Senate initiative makes matters worse 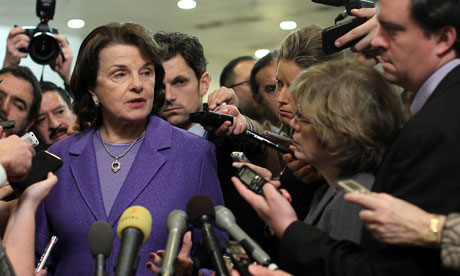 As I reported here, last spring a group of journalists and activists including Chris Hedges, Noam Chomsky and Tangerine Bolen, led by counsel Bruce Afran and others, sued President Obama to halt the implementation of Section 1021 in the National Defense Authorization Act (NDAA), which would have allowed for the indefinite detention of Americans without charge or trial. The vague definition of who could be detained included individuals who were seen to provide "substantial support" to al-Qaida's "associated forces" -- wording that provided no protection for journalists interviewing, for example, detainees in Guantanamo, or activists and advocates working with prisoners on their cases.

I was present in Judge Katharine Forrest's New York courtroom when she repeatedly asked Obama's lawyers if they could assure her that Section 1021 could not be used to detain people engaged in journalism or peaceful protest. The government's lawyers repeatedly refused to give her those assurances, or assurances that US citizens were not already  being detained under the NDAA. Forrest ultimately blocked the implementation of the act.

But the US government appealed the ruling. In October, a court agreed to stay the implementation of Forrest's injunction and hear the appeal. Afran has read the government's new brief for the case, and pointed out that the lawyers now argue that the NDAA won't be used to militarily detain individuals considered "independent journalists" or "independent" public advocates without charges or trial.

Who is considered an "independent journalist"? Afran noted, for example, that journalists associated with an outlet -- like Bob Woodward -- would not be considered "independent journalists," but self-employed or unemployed journalists are (though, in journalism, contracts and associations are much more complicated than that). He also added that almost all advocates are not "independent," as they are part of a movement or group with a philosophy. So, in the government's brief, the lawyers have gone even further than they did before in corralling new types of individuals who can legally be detained indefinitely without a civil trial.

To make matters worse, a recent development sees the threat of the NDAA on US citizens increasing. Democratic Senator Dianne Feinstein recently introduced an amendment to the 2013 NDAA, which, at first, seems to protect Americans' due process -- but, on closer examination, can be easily misinterpreted. Afran said that the Feinstein amendment "puts a gloss" on a very dangerous situation...

The original law at least left the issue of military detention somewhat ambiguous, but this amendment actually makes matters worse by explicitly allowing the military to take Americans into custody. The measure infringes on Americans' constitutional rights, asserts Afran, who explained that, since 1861, the US supreme court has written in at least four decisions that "people living in the US -- citizens or not -- cannot be taken into military custody and denied a trial in civil courts." Unfortunately, should the NDAA go through, this becomes the law of the land:

"Our system says a law is in force unless a court says otherwise. The president is considering vetoing the bill. We don't know if it will be passed by the House, then signed by the president. If it is, we may have to go back to the trial court."

As for the amendment, major media -- like the Huffington Post -- are taking Feinstein's amendment at face value as a measure of preventing Americans from being indefinitely detained by the military. Even Michael McAuliff's HuffPo piece ran with an erroneous headline that read "Indefinite Detention: Senate Votes Down Military Imprisonment of Americans." The few other journalists who have actually been following this story closely agree with the activists, and the American Civil Liberties Union has also chimed in, saying that the amendment actually makes indefinite detention more likely.

Shahid Buttar of the Bill of Rights Defense agrees with critics of the Feinstein amendment. He also makes the point that it would legally open the door for domestic military deployment in America:

Many questions press on this issue: why are there repeated efforts by Congress to affirm the power of military detention of Americans? Why are Obama's lawyers drafting language that yet more broadly targets journalists and activists who might be subjected to military detention?

And, just as importantly, why is this appalling and historic set of developments not front-page news in every newspaper in the land?

Author, social critic, and political activist Naomi Wolf raises awareness of the pervasive inequities that exist in society and politics. She encourages people to take charge of their lives, voice their concerns and enact change. Wolf's landmark (more...)
Related Topic(s): Constitutional Issues; Detainees; Double Standards; Feinstein-Dianne; Ndaa National Defense Authorization Act, Add Tags
Add to My Group(s)
Go To Commenting
The views expressed herein are the sole responsibility of the author and do not necessarily reflect those of this website or its editors.