Click Here to Remove All Ads
Cross-posted from The Guardian
Once, everyone believed they could succeed by hard work and gumption. Republicans no longer pretend to believe the myth. 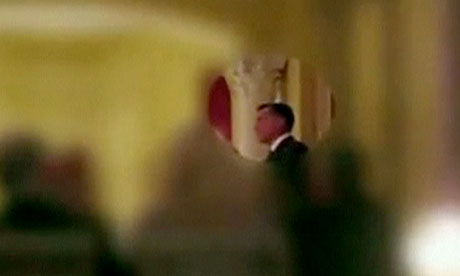 Mitt Romney's historic gaffe caught on video -- published, with great timing, by the left-leaning Mother Jones magazine -- in which he said that his campaign was writing off 47% of American voters since they "depended on government" handouts, was committed in an equally significant manner, as he delivered the remarks to a closed group of potential major donors in Florida. GOP stalwart and Wall Street Journal columnist Peggy Noonan is calling for an intervention in the campaign, and even some fellow Republicans are scampering to distance themselves from the inflammatory remarks.

But I find the remarks fascinating and important to deconstruct because they affirm -- as insider discourse captured for the public often can -- the fact that a new kind of narrative for America has taken over from one of our oldest and most cherished national myths. What Romney's comments reveal is that the American Dream is dead, killed off by skepticism from the bottom up -- by the 99% of lower-income and middle-class people who no longer believe in it -- and by cynicism from the top down -- by the 1%, top-earning people who don't believe in it.

What, after all, is the narrative of "the American Dream"? It was a discourse formulated between the 1880s and the 1920s in the United States during the great waves of migration and expansion and reforms of the Progressive Era. Slogans, often used by political leaders who wished to court the aspirational, immigrant vote, invoked a promise that America was "the land of opportunity", where hard work, gumption and a bit of luck could make any poor kid a millionaire.

This mythology, embodied over those decades in the Horatio Alger stories consumed particularly by upwardly mobile young men and in the phrase "to pull oneself up by one's bootstraps," consistently held out that American promise by equating hard work (along with other good Puritan values such as delayed gratification, temperance, saving and self-reliance) with economic success. As new waves of immigrants reached our shores after the second world war, the implicit pledge was elaborated into the idea for immigrants that even if their own hard work did not lift them into a new social class, it would elevate their children into the ever-growing ranks of the middle class.

The promise of the American Dream swept many presidents into power. Reagan offered a rightwing verison of it, with Bill Clinton -- departing from leftwing orthodoxy -- offering voters in 1992 a refreshingly-worded progressive version of the same promise: "work hard and play by the rules" and success will follow. Barack Obama, too, reprised the phrase in his 2008 campaign.

But now, the injunction to "work hard and play by the rules" is more likely to elicit a cynical cough of derision than a rush to the polling station. Post Tarp, post Libor scandal, post Madoff scheme, post justice department's pass for Chase, post HSBC money-laundering, post Occupy, post the ever-widening income gap in this country, and post the evisceration of civil society and public institutions that protect the middle class, the entire underpinning of the American Dream has been uprooted. And everyone knows it.

It is not surprising that the 99% stopped using the language of the American Dream, but what is notable from Romney's remarks is that even the wealthy have abandoned it. Notable because the premise -- that their own hard work and ingenuity is what caused their wealth to aggregate -- is a flattering and self-validating narrative. So, the fact that even the rich don't buy a version of what is now self-delusion is striking.

What Romney's remarks show is that the wealthy are handling the corruption of a system that benefits them by assigning blame for the destruction of the American Dream to the have-nots. In the Reagan years, only "welfare queens" and the small percentage of people actually on food stamps were targeted as drains on the system -- needing "government handouts" and failing to "take responsibility for their lives." Now, as Romney admits, the wealthy deem virtually half the voting public as irredeemably shiftless moochers. Notable, too, is Romney's use of an Occupy-echoing phrase, "the 47%," whom he feels free to objectify and dismiss.

Not especially shocking, though, is the fact that he is explaining to donors that he does not need that half of America. (Anyone who has worked on presidential campaigns knows that strategists all write off the 47% who will never vote for them; they just don't tend to go on camera to do that disparaging.)

I have been noticing, with sadness, that politicians do not even bother invoking the American Dream anymore. They know that we know that everything is rigged against it now, and that the language no longer persuades even the most naive and idealistic; the best you'll get from a politician is a pledge, playing to nostalgia, to restore its lost promise. But what is striking about Romney's remarks is that they have replaced that commitment with a willingness to blame a vast swath of striving, middle-class Americans for their plight.

We thus see a turning-point in American conservative philosophy. This was the moment when the wealthy elite stopped believing its own PR, the self-affirming myth of that economic success can always be had for those who want it and are willing to work. Mitt Romney has told us that it's now simply class war: a struggle to stop the other half getting what "we" have. Thank you for your candor, Mr Romney.

Author, social critic, and political activist Naomi Wolf raises awareness of the pervasive inequities that exist in society and politics. She encourages people to take charge of their lives, voice their concerns and enact change. Wolf's landmark (more...)
Related Topic(s): American Capitalism; American Dream; American Hypocrisy; Mitt Gets Worse; Mitt Romney; Republican; Romney 47 Percent; Romney Weird Stuff; Video, Add Tags
Add to My Group(s)
Go To Commenting
The views expressed herein are the sole responsibility of the author and do not necessarily reflect those of this website or its editors.