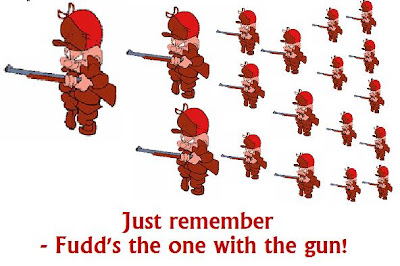 As a rule I define Christof***cists as existing in two groups: the Elmer Gantrys (Rick Warren, Pat Robertson, Creflo Dollar, Rod Parsley, etc.) who are snake oil salesmen in love with their own snake oil; and, the Elmer Fudds, the gullible and unwitting followers of the Gantrys, but no less dangerous since Fudd's the one with the gun.

In colloquial usage, the term demonization is used metaphorically to refer to propaganda or moral panic directed against any individual or group.

We've seen the results: America is becoming a nation of the bullies and the bullied. For Religious Right groups and media personalities, for gubernatorial candidates and city councils, demonizing rhetoric is the weapon of choice to harass, discriminate, degrade and (sometimes) kill the people they think are a drain on their society. And although the recent spate of teen suicides in the country seems limited to issues of sexual orientation, demonization has seeped into the public consciousness and spilled over into issues of politics, race, immigration and class struggles. The "bully pulpit" has become firmly entrenched in our American psyche and it shows no evidence of abating. In fact, it's escalating.

In the last year, we saw a new symptom of demonizing become part of our legal lexicon: righteous assassination. The term applies mostly to people who perceive someone's "immorality" to be evil and detrimental to the rest of the country. Byron Williams, the would-be terrorist against the ACLU and the Tides Foundation was about to commit "righteous assassination" when he was stopped on California's Interstate 80 outside of Oakland, CA. He mentioned inspiration from FOX-News and Glenn Beck (read the UPDATE below). And before that incident, we were horrified at a shooting at a Unitarian Church in Knoxville, TN because the accused " targeted the congregation out of hatred for its liberal social policies."

Tony Perkins and his Family Research Council have been very busy juggling demonizations of President Obama, DADT, the "gay agenda," health care reform, everyone "liberal," "activist judges" and, well, the list goes on and on; so it might seem that FRC is the only organization doing the demonizing. WRONG. It only seems that way, because the FRC has been quicker and more vocal. The other demonizers are still out there in full force, taking notes from Perkins. Case in point: what Perkins and the FRC did in the last 24 hours shows its dedication to A-1 demonizing:

The ruling by a Federal district judge that the policy of DADT in the military is unconstitutional has garnered quick response from RR bullies across the country.From the FRC:

Once again, homosexual activists have found a judicial activist who will aid in the advancement of their agenda.

Rev. Dan Vojir is has been writing/blogging on religion and politics for the better part of ten years. A former radio talk show host (Strictly Books " Talk America Radio Network) and book publisher, Dan has connected with some of the most (more...)
Related Topic(s): Bryan Fischer; Bullying; Christofascists; Family Research Council; Glenn Beck; Teen Suicides, Add Tags
Add to My Group(s)
Go To Commenting
The views expressed herein are the sole responsibility of the author and do not necessarily reflect those of this website or its editors.