Some progressive writers have claimed that it's a myth that Ralph Nader caused Al Gore to lose the 2000 presidential election to Bush.

They say there were other reasons for the loss: the Supreme Court, bad ballots in Florida, Gore's losing in his home state, etc. They fail to realize two things.

First, events can have multiple necessary, contributing causes. There can be, say, 10 factors that, together, cause an event to happen; if any single one of the factors had been absent, that would have been sufficient to stop the event from occurring.

Think of it like an evenly matched tug of war, with ten people on each side. If any single person stops pulling, the other side wins.

Or think of it as ten people struggling to, just barely, push a heavy boulder up and over the summit of a hill.

Or think of as a chain, which is only as strong as its weakest link.

This is certainly the case in Florida, where the election was extremely close (about 900 votes separated Gore from Bush).

Thus, in the 2000 presidential election, there were multiple contributing causes for Gore's loss. Any one of those causes was necessary to push Bush over the top. Given the closeness of the race, any of several changes would have flipped the outcome in Gore's favor. 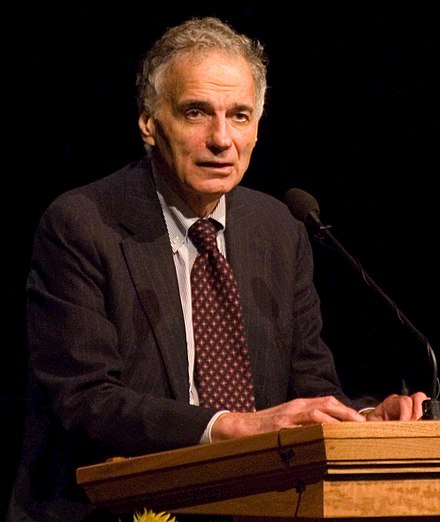 And absolutely irrelevant to the question whether Nader and his approximately 90,000 Florida supporters also caused Gore to lose.

The second thing that it is important to realize is that one shouldn't and can't blame just Nader for drawing support from Gore. One also has to blame Nader's supporters. Defenders of Nader often play a sophistic rhetorical trick. They say: suppose Nader hadn't run. What would his supporters have done? Would they have voted for Gore? For Bush? Or would they have voted third-party or stayed home?

It's absolutely true that many of Nader's supporters wouldn't have voted for Gore in any case. But that's the point! What were they thinking? They should have known that the race was close, that Nader had zero chance of winning, and that a Bush win would be disastrous for the nation. So why didn't they vote for ardent environmentalist Al Gore? Instead we got George W. Bush, and you know what happened with him, and with the Supreme Court, and with the war in Iraq, and with tax breaks for rich people, etc.

For an example of an article based on faulty reasoning, consider Don't Fall for It: The Nader Myth and Your 2016 Vote. The authors, Kevin Zeese and Margaret Flowers, write, "The key state to focus on is Florida, but it is important to remember that Gore lost his home state, Tennessee, and lost Clinton's home state of Arkansas. If he had won either of those, he would have been president."

Likewise, they write, "In Florida, Bush won the votes of 308,000 Democrats, that is 12 times more Democrats than Nader's mere 24,000. Gore also lost 191,000 self-described liberals to Bush, compared to less than 34,000 who voted for Nader. In addition, half of all registered Democrats did not even bother voting. For about one million Florida Democrats it was: Vote Bush or don't vote. If one percent of any of those categories had voted for Gore he would have easily won Florida."

Related Topic(s): Bush Admin; Gore Al; Nader-Ralph, Add Tags
Add to My Group(s)
Go To Commenting
The views expressed herein are the sole responsibility of the author and do not necessarily reflect those of this website or its editors.