Historians will look back at the presidency of Barack Obama as one that was both triumphant and tragic.

It was triumphant for the obvious reasons: Obama is a brilliant orator and a decent human being. He is the first black man to win election to the highest office. He saved America from the worst economic downturn since the Great Depression, bringing on economic growth that continues until now. 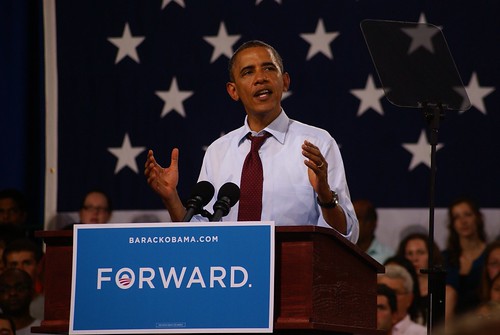 Yet the tragic thing about the presidency of Barack Obama was that he was given a once-in-a-generation opportunity to control the narrative, expose GOP corruption, establish a strong Democratic majority and save America from the forces of corporatism and militarism.

A review of the evidence shows that Obama failed to take advantage of the opportunities he had available, with the result that most of his legacy is now being destroyed.

In short, he didn't fight.

Due to an excess of moderation, idealism, naivete', and/or cowardice, Obama disheartened his supporters, confused the public about which party would serve their interests, allowed the Republicans to control the narrative, and facilitated the handover of the White House, Congress, the Supreme Court, and a majority of state legislatures to extremist Republicans.

Specifically, the Democrats lost 900 seats in state legislatures during Obama's presidency. "At the beginning of Obama's term, Democrats controlled 59 percent of state legislatures, while now [in early 2017] they control only 31 percent, the lowest percentage for the party since the turn of the 20th century. They held 29 governor's offices and now have only 16, the party's lowest number since 1920." (source: Barack Obama Won The White House, But Democrats Lost The Country: What Happened?)

And Donald Trump is now president.

Here's a particularly outrageous example of Obama's bad choices. As reported in Politico (Biden: McConnell stopped Obama from calling out Russians), three weeks before the 2016 election, Obama and Biden wanted to inform the American people about Russian interference in the election. But they allowed Mitch McConnell to veto the announcement.

Biden said he and former President Barack Obama worried that without a united front of bipartisanship, speaking out before the election would undermine the legitimacy of the election and American institutions in a way that would play into the Russians' larger ambitions. (source)

About a week later, Obama allowed James Comey to announce that he was re-opening the email investigation against Hillary Clinton.

This is the same Joe Biden, by the way, who as chairman of the Senate Judiciary Committee that was holding hearings on the nomination of Clarence Thomas to the Supreme Court, decided against allowing women other than Anita Hill to offer testimony about Thomas's sexual harassment.

Republicans in Congress had opposed virtually every policy position of President Obama. The Senate threatened filibusters on numerous bills. In March of 2016, President Obama nominated Merrick Garland to the Supreme Court; the Senate, under the leadership of Mitch McConnell, refused to hold hearings on the nomination. Yet three weeks before the 2016 election, Obama and Biden still wanted to be bipartisan and still deferred to Mitch McConnell?!

Related Topic(s): President Barack Obama POTUS, Add Tags
Add to My Group(s)
Go To Commenting
The views expressed herein are the sole responsibility of the author and do not necessarily reflect those of this website or its editors.