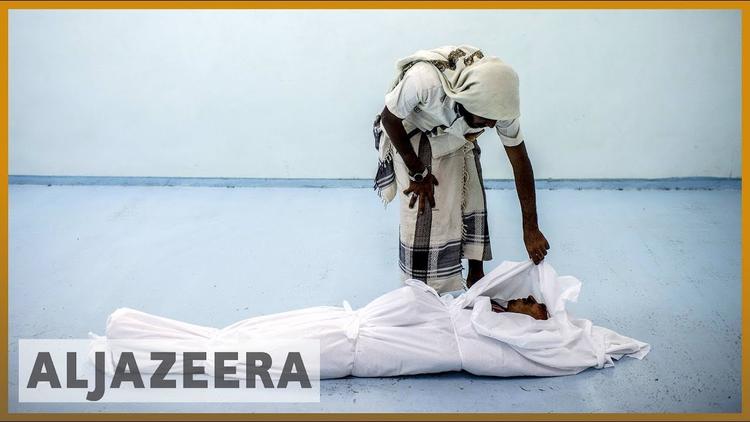 Memorial Day should be rethought, as a day to mourn the death and destruction caused by war.

Trump is using a legal loophole to declare an emergency in the Gulf and sell Saudi Arabia and its allies $8 billion in weaponry despite the opposition of Congress. Both houses of Congress have passed a resolution against continued US support for the Saudi and United Arab Emirates war on Yemen. The US provides logistical help, including in-air refueling, and strategic advice on targeting.

The UN Development Program says that by the end of this year 233,000 Yemenis will have died as a result of this US-backed war, and as we speak 250,000 Yemenis are on the brink of starvation.

Saudi Arabian pilots at the controls of US-supplied F-16s striking Yemen cannot seem to distinguish between civilian apartment buildings full of families and the military bases of Houthi rebels holding Sana'a. On May 22 they hit another such building in downtown Sana'a, leaving who knows how many dead.

Saudi-allied militias fired indiscriminately in the city of Taez last week setting off a fuel tank, killing 12 civilians, including seven children ages 4 to 14, according to UNICEF.

We Americans are complicit in the deaths of those seven children.

The UN High Commissioner for Refugees reports of Yemen, a country of 28 million people:

More than 80 percent have been displaced more than a year

In addition, deadly cholera outbreaks have infected over a million people, though most have survived.

The war in Yemen broke out when Houthi rebels from the Shiite Zaydi branch of Islam took the capital Sana'a in 2014-2015 and then attempted to extend their sway over the rest of the country. They are an indigenous Arab militia and most of their weapons are American, taken from Yemeni army depots when they were allied with the late deposed president, Ali Abdullah Saleh, who still had support from part of the Yemeni army. Saudi Arabia and the Trump administration say they are a cat's paw of Iran, but that is a vast exaggeration. There is no command and control, and Iran has only been able to get a minor amount of monetary or weapons help to them because it does not control the Red Sea and overland routes from Oman are virtually impassable.

Related Topic(s): Day Of The Dead; Death; Memorial Day; Saudi Embassy; Starvation; Yemen Destruction, Add Tags
Add to My Group(s)
Go To Commenting
The views expressed herein are the sole responsibility of the author and do not necessarily reflect those of this website or its editors.