The presidential candidate is great at identifying problems, but his policy proposals need a lot of work. 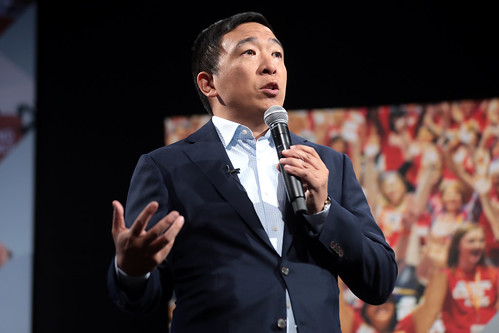 The most striking moment so far in Andrew Yang's unlikely yet resilient presidential bid came in the fourth Democratic debate, when someone else was asked about Yang's signature issue. Addressing Elizabeth Warren, moderator Erin Burnett said, "You wrote that blaming job loss on automation is 'a good story, except it's not really true.' So should workers here in Ohio not be worried about losing their jobs to automation?" The candidate's response was a slurry of "by golly," "gee," and "I have a plan to fix that" sloganeering that focused on legitimate concerns about trade policy as it has affected industrial workers but never got around to answering the question. Warren wasn't wrong to criticize the "giant multinational corporations who've been calling the shots on trade." It's just that she seemed to be giving a 1993 answer to a question about 2023.

That gave Yang a narrow opening to plead with his fellow Democrats to start thinking about the future. "Senator Warren," he said, "I've been talking to Americans around the country about automation. And they're smart. They see what's happening around them. Their Main Street stores are closing. They see a self-serve kiosk in every McDonald's, every grocery store, every CVS. Driving a truck is the most common job in 29 states, including this one -- 3.5 million truck drivers in this country. And my friends in California are piloting self-driving trucks. What is that going to mean for the 3.5 million truckers or the 7 million Americans who work in truck stops, motels, and diners that rely upon the truckers getting out and having a meal? Saying this is a rules problem is ignoring the reality that Americans see around us every single day."

"So I understand that what we're all looking for is how we strengthen America's middle class," replied Warren, who then explained her "plan to extend the solvency of Social Security." She never got to the automation question, except to say, "I want to understand the data on this." That should have put the spotlight back on Yang, a 44-year-old entrepreneur who can point to so many studies on how automation already has displaced workers and will continue to do so that his campaign slogan is "MATH." Instead, following the common practice of 2020 Democratic debate hosts, Burnett shut the conversation down just as it got interesting.

Related Topic(s): Capitalism; Debate; Democratic; Issues, Add Tags
Add to My Group(s)
Go To Commenting
The views expressed herein are the sole responsibility of the author and do not necessarily reflect those of this website or its editors.