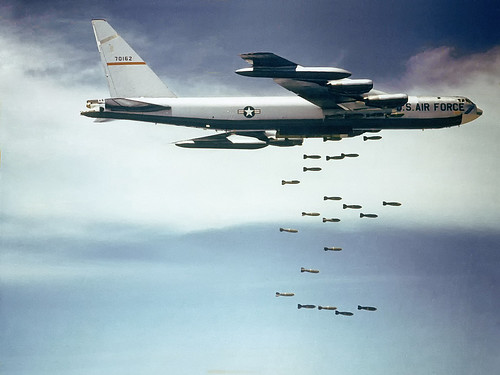 B-52F releasing its payload of bombs over Vietnam
(Image by manhhai)   Details   DMCA
st' Americans in military uniform have bombed Syria again. They bombed Syria again just as the Syrian army with the help of Russia, Iran and Hezbollah had finally, after seven years, defeated the terrorist groups, which had heavy weaponry and Toyota trucks supplied to them by United States and Saudi Arabia. The terrorist groups destroyed much of the country and caused the death of some 350,000 Syrian men, women and children. Many Syrians had their heads cut off by the fanatic terrorists. It has been an open secret that Americans and Saudi Arabians have been funding and arming them for some seven years.[HOW ISIS GOT WEAPONS FROM THE U.S. AND USED THEM TO TAKE IRAQ AND SYRIA, NEWSWEEK, 12/14/17 http://www.newsweek.com/how-isis-got-weapons-us-used-them-take-iraq-syria-748468 ]

No sense in paying attention to the West's criminal media propagated pretexts for the US government and other Western Colonial Powers ordering their airmen to bomb and invade former colonies. It is now documented history that in each case the publicly announced and promoted pretext has been either a blatant lie or an absurdity.

Absurdities and lies notwithstanding, every genocidal action performed by the GIs of superpower USA, has had all the Caucasian populated nations of the world, to one degree or another, in solidarity with USA, or looking the other way in tacit acquiescence. Meanwhile, Mr. & Mrs. America have been watching their sons and daughters in uniform go off to bomb smaller and poorer nations than their own and be acclaimed as heroic.

American attitudes have been media altered from what this writer was taught as a child some seventy-five years ago. Back then when we saw a fight, we'd cheer for the little guy, and that bully on the block slapping around kids half his size made us angry.

This archival research peoples historian thought it might be an enlightening reminder of similar unjust bullying for some readers, especially readers in nations that have suffered being bombed by Americans in uniform, to scroll down a list of all the smaller nations Americans have bombed since the Second World War.

Look into any of these regime change bombings upon innocent populations by GI sons and daughters of Mr. and Mrs. America, and it becomes clear that the defenders of their small but beloved countries are the real heroes facing American high tech missile weaponry and air power that can high altitude carpet bomb, strafe the ground and release fiery clouds of napalm.

The insane upside down version of history propagated on American mainstream media internationally via satilite will eventually be exposed for the evil insanity that it is. With the rise in economic power of Chinese civilization, the rapid increase of populations of the victimized Third World, and personal communication technology racing forward, new sources of information will soon be available.

But why wait for honest media from the victim nations for enlightenment.

Your author has included a little extra history of unlawful bombing events that have received little attention both in criminal media and independent and alternate media. In the list, the name of the nation bombed is followed by the population of that nation at the time of earliest unlawful bombing committed by Americans. The nations of smallest populations are at the top of the list.

Kuwait population 2 million - During the American led coalition offensive in the Persian Gulf War, American, and American led Canadian, British and French aircraft bombed retreating Iraqi military personnel attempting to leave Kuwait on the night of February 26--27, 1991, resulting in the destruction of hundreds of vehicles and an enormous death toll, including refugees trying to flee Kuwait. Between 1,400 and 2,000 vehicles were hit or abandoned on the main Highway 80 north of Al Jahra, Kuwait, thereafter dubbed 'Highway of Death'. Several hundred more littered Highway 8 to Basra.

Laos population 2.5 million - USA made Laos the most bombed nation per capita in the history of world - bombing was initiated by President Eisenhower and continued until 1975.

It failed to suppress communism. Laos has a communist party run government.

Related Topic(s): Capitalism Over Humanity; Genocide; Predatory Capitalism; Regime Change, Add Tags
Add to My Group(s)
Go To Commenting
The views expressed herein are the sole responsibility of the author and do not necessarily reflect those of this website or its editors.