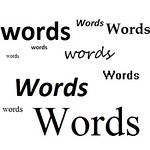 All I have to say is that words matter! Knowledge is power say the wisdom of the ages , and it is passed down by this talking primate through words. No civilization thrives on lies and misinformation. Words matter, and there are some words that matter more than others if it is survival at stake!

Trust! Such an important word. It's all about trust in the long run. Winning is often possible only by trusting. Beginning with trusting oneself, and depending on the guidance and assistance of others who can be trusted.

It is not merely that I am an 'English' teacher that I say this. The choice of our words absolutely defines who we are! It is not merely that words are all I have to bring a character to life in my head" -- so I can write a play where the words a character utters are the only way for the audience to determine WHO they are watching. Behavior is all, and dialogue defines character.

Words are all that you and I have to use, when we dip back into our brains in order to look at the prior knowledge that we already possess -- in order to compare it with the BEHAVIOR that appears in front of our eyes, on our stage; (we teachers call this critical analysis, as does the behavioral scientist Benjamin Bloom !)

I have trusted many people as I approach my eighth decade. I can speak from long experience with untrustworthy folks. I saw Trump for what he was, from the start, listening to him on 'that bus!' And yet, someone recently told me that the bus conversation, was merely "locker room talk." How sad!

Words matter: 'assassination of a 'terrorist'? Who defines those words? Pompeo? He is 'out there' on the MSM using those words -- although he is unable to define the word "imminent" (as in "imminent threat" by that terrorist, whom he decided must be assassinated.)

Pompeo's words were trusted by Trump... as few 'advisors' talk to that senile narcissist these days--and it is Fox News which determines his 'facts!' "Donald Trump has not made a single public statemen t since ordering last Thursday's operation that has not been either unhelpful or counterproductive." That letter about " withdrawing our troops from Iraq" is a prime example.

Although this truth is as clear to me, on my stage, it does not mean that this truth is recognized by anyone else. They do not recognize the utter incompetence for THIS job in this historical moment -- when this 'deal-maker is in charge. He is untrustworthy because of his total disdain for facts, his enormous ignorance, his impulsiveness especially towards 'global destabilization, " his dishonesty, cruelty and self-absorption, his utter contempt for advice from those who are familiar with running a government, and his admiration and "coddling of hostile autocrats" and "frightening style of leadership."

Blindness to Trump's behavior, to his words has led us to this moment where elected congressmen will not hold him accountable for breaking the law he has sworn to uphold.

It must stop now. This is not about politics" it is about survival.

"Limited cognition? Dubious character? Those may not matter when you're choosing the gilt for a golf resort or skyscraper. They do when you're deciding whether to put American lives on the line." We can't trust Donald Trump as our Commander and Chief.

Other Series: View All 766 Articles in "DON'T MISS THIS!"

Other Series: View All 80 Articles in "FAKE NEWS"

Other Series: View All 174 Articles in "Meddling Through Disinformation: Weaponizing LIES"