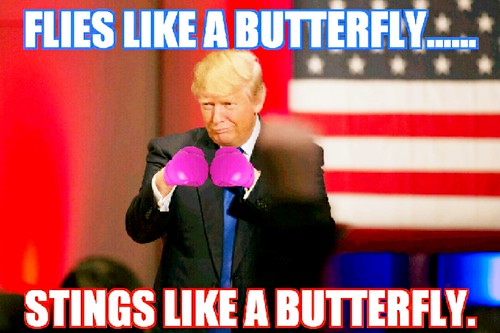 Cogito ergo sum, I think therefore I am. Rene Descartes' philosophical dictum comes to mind at Trump's extraordinary claims. Prominent among them originally is the 'birther' issue, the charge that Barack Obama was not born in Hawaii or any other US state and therefore not a legitimate US president. This time the issue concerns Trump personally. He claims he was not defeated in the November election.

In a 45-minute speech posted on YouTube, he repeats the assertion adding that he has proof. The mercurial president now promises to abide by the electoral college vote on December 14. At the same time he is busy exerting pressure to persuade the electors to change their votes. In Georgia, for example, Trump has not accepted defeat. Joe Biden is the first Democratic presidential candidate to win the state since 1992 when Bill Clinton ran from the nearby state of Arkansas.

Holding his first rally there after the election, Trump alleged voter fraud making numerous unsubstantiated claims and attacking Governor Brian Kemp. Earlier Trump had criticized the governor on Twitter for refusing to act. The widespread voter fraud claim rests on his repeated allegations of a postal vote dump of hundreds of thousands of votes about which he says he has proof but has yet to provide it. He made similar assertions in other battleground states like Pennsylavania. But Biden's margin of victory, 306 electoral votes versus Trump's 232 can withstand losing Georgia, and now the issue there is about senate control.

Georgia is an unusual state in requiring a run-off election, if in a winning plurality the candidate does not achieve over 50 percent of the vote. It harks back to the days when the white community feared a single black candidate against several whites splitting the white vote might win a plurality. Hence, the run-off for Georgia's senate seats, one of which was up for election and the other because the incumbent decided to resign.

Another last-ditch effort by the president and his allies is to mount an assault in Congress. The Electoral College may cast the vote on December 14 but it is up to Congress to certify it and federal law allows members of the House or Senate to challenge the results from the floor.

The Democratic led House is likely to reject the challenge. But what about the Senate? Well, Senator Rand Paul has already repeated some of Trump's allegations of fraud in key states like Michigan. Should the challenge pick up a senator to join the effort, it would force votes in the House and Senate -- a toxic vote putting Republicans up to scrutiny in 2022 and a prospect unlikely to be looked upon by favor for the majority leader Mitch McConnell.

Thus the House is going to certify Biden's victory and Trump's so-called ' win' will end up in the rubbish dump of history. Trump himself will be out there twittering away -- he wants to run again in 2024 when he feels he will have no difficulty in beating then Vice President Kamala Harris.

Arshad M Khan is a former Professor. Educated at King's College London, Oklahoma State University and the University of Chicago, he has a multidisciplinary background that has frequently informed his research. He was elected a Fellow of the (more...)
Related Topic(s): Election; Senate; Trump And Mail-in Ballots; Trump Attemts To Void Election; Trump Lawsuits; Trump Rally, Add Tags
Add to My Group(s)
Go To Commenting
The views expressed herein are the sole responsibility of the author and do not necessarily reflect those of this website or its editors.