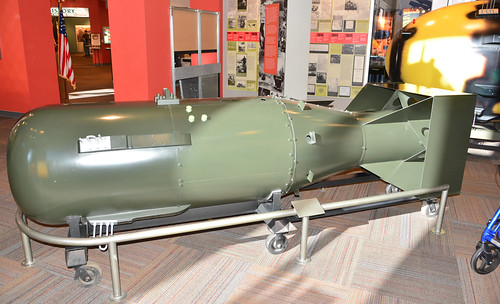 At 8:15 on a still cool autumn morning on August 6, 1945, an American B-29 Superfortress airplane, the Enola Gay, flying at an altitude of 31,000 feet, dropped, by parachute, (because it had only 45 seconds to get clear of the subsequent explosion), a Little Boy atom bomb over the city of Hiroshima.

The bomb exploded at an altitude of 2,000 feet, destroying about 70% of the city.

The Colonial Pipeline cyberattack on May 7, 2021 affected many cities in fourteen states along the East Coast -- including Washington, D.C. -- by disrupting a major source of fuel for gas stations and airports.

Is this how wars might be fought in the future?

No major country wants to start a nuclear war. Cities would be destroyed and millions upon millions of people would be killed. The first country to launch a missile with a nuclear warhead would receive instant retaliation as every major superpower now possesses an arsenal of nuclear weapons.

Infrastructure cyberattacks can crush the economy of a country and bring commerce and transportation to a sudden halt, all without destroying cities and killing millions of people, and -- unlike the trajectory of a missile that can be tracked by satellites to the country of origin -- the cyberattackers can hide their tracks without fear of instant retaliation.

Was what happened at Colonial Pipeline a dry run for the future?

According to James Chappell, co-founder of Digital Shadows, a London-based cyber-security firm:

The Colonial Pipeline attack was helped by the coronavirus pandemic, with more engineers remotely accessing control systems for the pipeline from home.

And in an article in Politico:

The incident at Colonial underscores how cyberattacks can disrupt the nation's critical infrastructure even without directly corrupting that equipment. Infrastructure operators that suffer computer intrusions often shut down certain functions or facilities to prevent the problem from spreading further. In this way, a seemingly minor breach of a payroll or email system can cause cascading effects that prompt companies to halt production, energy distribution, or other important operations.

While the Colonial Pipeline attack only affected the East Coast of the United States, imagine if a coordinated attack would occur in multiple cities across the entire country affecting everything from cell phone communications, landline telephones, the internet, cable television, hospitals, universities, military bases, the electrical power grid and numerous other government and corporate entities.

The disruption of a country's infrastructure and the economy could be far worse than one city in Japan on August 6,1945, or one city in the United States on September 11, 2001.

Jack Lindauer has written for the Los Angeles Daily Journal newspaper. He is a Los Angeles based filmmaker. He writes on foreign policy issues. He studied Political Science at Harvard University, with a concentration in U.S. Public Policy.

Related Topic(s): Infrastructure US; Nuclear, Add Tags
Add to My Group(s)
Go To Commenting
The views expressed herein are the sole responsibility of the author and do not necessarily reflect those of this website or its editors.

The Real Reason Why China May Want Reunification With Taiwan

Why Russia Invaded Afghanistan 42 Years Ago

Why Mass Shootings May Never End