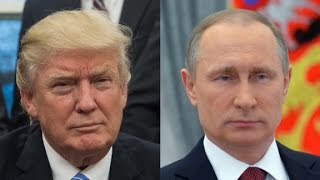 Are the US and Russia entering a War?
(Image by YouTube, Channel: CNN)   Details   DMCA

Stephen Lendman agrees that the murderous criminals in Washington are driving humanity to extinction.

Because of the control over explanations that people in the Western world receive, most are unaware of the mounting danger.

In the past few days extreme and serious threats have been issued against Russia and Syria by Washington and London. It seems that finally the Russians have had enough. The Russian Foreign Ministry informed the crazed UK prime Minister May that "one does not give 24 hours notice to a nuclear power."

The Russian Foreign Ministry went on to state that the so-called "Skripal poisoning" is "a colossal international provocation" and "another crooked attempt by the UK authorities to discredit Russia."

Powerful Russia put impotent Britain on notice: "Any threat to take 'punitive' measures against Russia will meet with a response. The British side should be aware of that."

As for Washington's threat to strike Syrian army forces, Russian Foreign Minister Lavrov said if such a strike occurs, "the consequences will be very serious."

It could be the case that Washington, concerned about its deteriorating military capability vis-a-vis Russia, has decided to attack before the new Russian weapons are fully deployed, and that the purpose of the threats based on orchestrated false charges are to prepare the Western peoples for war.

Related Topic(s): International; Military; Russiagate; War With Russia; Weapons, Add Tags
Add to My Group(s)
Go To Commenting
The views expressed herein are the sole responsibility of the author and do not necessarily reflect those of this website or its editors.