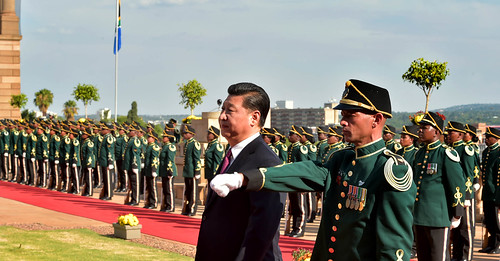 Chinese President Xi Jinping inspects the military guard of honour during his state visit to South Africa at the Union Buildings in Pretoria.
(Image by GovernmentZA)   Details   DMCA

This month, fifteen Asia-Pacific nations signed a trade deal that will restrict Washington's ability to project neo-colonial power through trade maneuvers like never before. The Regional Comprehensive Economic Partnership, headed by China, establishes a newly firm trade relationship between China and Japan while strengthening the already tightly-knit economic relationship between many of the Asian nations that U.S. imperialism depends on to maintain its super-profits. As a consequence, U.S. industry may well lose $5.3 billion as production in the region shifts to Chinese firms.

Even more troubling for the Washington imperialists, who seek to rebuild America's recently shrunken global hegemony throughout the Biden era, is the fact that this deal preemptively nudges out the pro-U.S. trade deal which Biden's team plans to bring about. Biden will likely try to revive the Trans-Pacific Partnership, the deal that would vastly expand corporate power, destroy environmental protections, and ship out more U.S. jobs. But because China has presented an alternative trade deal to all of the Asian powers that would otherwise further become neo-colonial vassals under Biden's re-negotiated version of the TPP, we can be confident that at least as far as Asia is concerned, the U.S. won't be able to use the TPP to expand its economic plunder.

But many people with class consciousness don't necessarily view this tipping of the global economic leverage towards China as a good thing. They see China as just another imperialist power that will perpetuate neo-colonialism within Asia, Africa, and the other places it's building ties with. Under this perspective, developments like the RCEP deal don't represent any kind of progress towards a liberated global proletariat.

The thing about their argument is that while I believe it's misguided, I understand where they're coming from and which detrimental developments are causing them to see China as a force for imperialism. China's decision to grow into a major economic player has come at the cost of exporting the racially chauvinistic aspects of Chinese society to the countries it's doing business with, as well as made China entangled within the structures of global capitalism. A New York Times article from 2018 describes the patterns of discrimination within Kenya that have appeared as China has invested in it:

As the country embraces China's expanding presence in the region, many Kenyans wonder whether the nation has unwittingly welcomed an influx of powerful foreigners who are shaping the country's future""while also bringing racist attitudes with them"In Nairobi, workers in their 20s and 30s swap stories of racism or discrimination they have witnessed. One described watching a Chinese manager slap her Kenyan colleague, who was also a woman, for a minor mistake. Other Kenyan workers explained how their office bathrooms were separated by race"

The accounts from here can't be honestly disputed. Nor can the fact that China's foreign business ventures have at times had the result of going against the interests of the local populations and the environment. As The Council of Canadians wrote three years ago about the implications of the free trade deal that China was attempting to negotiate with Canada: "China is clearly interested in oil and gas resources in Canada""and that invariably impacts Indigenous rights"The Council of Canadians opposes a Canada-China Free Trade Agreement and sees it as detrimental to people and the environment in both Canada and China."

These things aren't imperialist propaganda, they're simply honest observations about the contradictions that have emerged because of China's model of economically expanding within the global capitalist order. But this doesn't legitimize the half-truths and untruths that opportunistic propaganda sources (The New York Times especially) have spun using the legitimate grievances of those caught within the negative aspects of the rise of this superpower.

China's coming into such intense contact with African society has brought the culture clashes described above, but it hasn't brought about the "neo-colonial" actions that Western imperialist narrative managers have accused China of committing. Chinese investments haven't mirrored the actual neo-colonialism of the Euro-American imperialist powers. Chinese enterprises haven't only hired Chinese workers. China hasn't engaged in massive land grabs. China hasn't been working to trap African nations in debt. China hasn't strategically worked with African countries that are rich in natural resources or that are led by dictators. All of these falsehoods have been propagated to make it appear as though China's establishments of ties to the continent are all illegitimate (something that Washington wants us to believe at a time when it's using AFRICOM to try to retain its threatened imperial dominance over Africa).

Apart from the discriminatory behaviors of some Chinese individuals, which the Communist Party of China can only keep in check to a certain extent, China's growing role within Africa is overall resulting in African nations being better able to dig themselves out of the economic holes which Western imperialism has put them into. Thanks to China, they're more easily achieving development without the help of Western imperialists who will only give them enough loans to trap them into debt and geopolitical servitude. Since China's actions in Africa and elsewhere don't have the most important parallels to the West's role in Africa and elsewhere, these nations are getting more economic freedom from imperialism out of the deal. I don't discount the presence of anti-African sentiment within parts of Chinese society or the harmful Han chauvinist culture that these sentiments stem from, but from an anti-imperialist perspective China's role has been a net positive.

China's actions, even the ones which have consisted of ethically questionable practices like getting involved in the allocation of indigenous resources, haven't consisted of imperialism from a Marxist analysis. As I've delved into within a past article, the criteria for imperialism that Lenin explained are not met by the actions of modern China. And those who still argue that China is imperialist often depend on the argument that China isn't a socialist state but a capitalist oligarchy, which is a willful distortion of the nature of Socialism with Chinese Characteristics; if China hadn't opened up its economy, it wouldn't have been able to lift around 900 million of its people out of poverty throughout the last generation or so. And China's international trade and business ventures, despite their sometimes mixed results, have been essential to this vast expansion of China's wealth and living standards.

China's actions around the globe aren't free from contradictions, anymore than China's goal is to foment revolutions abroad. To what extent socialists want to criticize these contradictions, and how much responsibility they want to put on the CPC for letting these contradictions arise, is something that's healthy to debate. But we shouldn't propagate the misinformation that Western imperial chauvinists seek to put into our minds about what China is doing. And we should recognize the growth of China's global role as a reversal of the economic inequities that have been created by neo-colonialism, and as a sign that imperialism is losing its dominance over the globe.

Related Topic(s): Canada; China; Debt; Misinformation; Propaganda, Add Tags
Add to My Group(s)
Go To Commenting
The views expressed herein are the sole responsibility of the author and do not necessarily reflect those of this website or its editors.