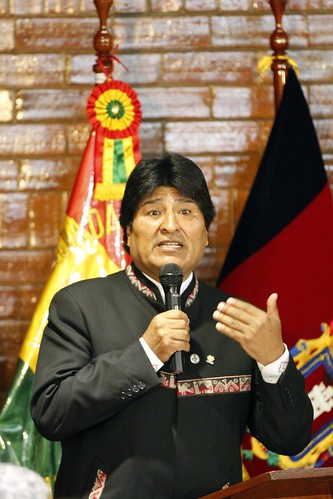 This effort by the empire to co-opt the environmental movement shows that we can only save the planet, much less win the class war, by rejecting corporatist front groups like Extinction Rebellion and building a socialist anti-imperialist movement.

The political and media establishment throughout the capitalist world is only superficially opposed to the politics of fascistic politicians like Donald Trump and Jair Bolsonaro. Fascism, wherein corporations use the powers of the state to solidify their dominance, is what the capitalist class always turns to when its power is threatened. This is the context behind the current Western media campaign to blame Bolivia's socialist president Evo Morales for the Amazon fires when Bolsonaro is the one who's responsible; the ruling establishment is protecting fascists while attacking the leaders who seek to overthrow capitalism.

The standard propaganda tools that the empire is using for Bolivia

This cynical bourgeois agenda was demonstrated last week, when the supposedly left-leaning paper The Guardian published an article titled "'Murderer of nature': Evo Morales blamed as Bolivia battles devastating fires" These assertions-which ignore that the fires are concentrated in Brazil and that Bolivia has provided crucial aid in fighting the fires-are as untrustworthy as the sources behind them.

The Guardian is on record for fabricating a story about Julian Assange meeting with Paul Manafort,deliberately lying about Assange's plans for leaving the Ecuadorian embassy, and committing journalistic malpractice by falsely naming two Twitter accounts that are run by actual people as Russian bots. The paper's propensity for this kind of dishonest character assassination-as well as for regime change propaganda-is the result of its collusion with Britain's intelligence agencies, which make up one facet of the powerful institutions that are now trying to demonize Bolivia's government.

Outlets like The Guardian serve the role of legitimizing the disinformation that the more central propaganda operatives put out. In the case of the Amazon fire story, a major source behind the accepted media claim is Jhanisse Vaca Daza, who's been identified as an "environmental activist" by a BBC article that's helped support the narrative that Morales is the culprit.

As Wyatt Reed from The Grayzone has assessed in an article about Daza, this "activist" is in fact an agent for U.S./NATO regime change goals. Daza, who gave a speech for TEDx in February outlining plans for a "strategic nonviolent struggle" to overthrow Morales, has founded an NGO called RÃ­os de Pie whose purpose is to spread anti-Morales propaganda. Daza has also been appointed as manager of the "Freedom Fellowships" that have been issued by the Human Rights Foundation, an organization which functions as a training network for activists who seek to overthrow leaders that Washington wants to depose. Daza has helped issue these "Freedom Fellowships" to ten "anti-authoritarian" activists in places that include Venezuela, Nicaragua, Russia, and Hong Kong (all of which the U.S./NATO empire seeks to destabilize).

Reed's account of Daza's work within the anti-Morales movement reads like a story about the career of Juan Guaido, who's also received help from CANVAS and the National Endowment for Democracy in his efforts to destabilize Venezuela. Reed writes:

HRF is not the only Western government-backed regime-change group to have propelled the career of Jhanisse V. Daza. When the Human Rights Foundation announced Daza was one of its "freedom fellows" in 2019, the organization noted that this "pilot opportunity" was sponsored "in partnership with CANVAS," or the Center for Applied Non-Violent Action and Strategies.

CANVAS also co-sponsored the online program Daza graduated from Harvard's Kennedy School. Students like her gained a "systematic opportunity for nonviolent social movement mid-level leaders to learn from the experiences of peers and through the coaching of Harvard/CANVAS faculty," according to Kennedy School literature. As The Grayzone has reported, CANVAS had been funded largely through the National Endowment for Democracy, a CIA cut-out that functions as the US government's main arm of promoting regime change.

Upon learning these facts, I've gotten the sense that I'm watching a great, manufactured pattern play out under the guise of being a "spontaneous" uprising against a "dictator." Six months ago the exact same kind of regime change operation was happening in Venezuela, complete with absurd media accusations against the Chavista government, disingenuous language from establishment propagandists about Maduro being a dictator, and grandstanding from "pro-democracy" right-wing opposition leaders like Juan Guaido. The picture has been basically the same for the recent U.S.-manufactured efforts towards insurrection in Hong Kong, Nicaragua, Ukraine, Syria, and Iran; it's a script that the empire keeps repeating again and again.

Behind the bellicose rhetoric of empire mouthpieces like Daza, signs of instability in the global capitalist order are detectable behind every facet of this endless regime change campaign. The U.S. has so often been trying to overthrow its rivals through manufactured uprisings rather than military invasions because after the horrors of the Iraq invasion, it became less easy to sell traditional wars to the public. This concealment has been necessary because as American global power rapidly declines, the U.S. has to try to subdue numerous rival countries at once in order to maintain its dominant global position. The relentless American drive towards foreign regime change throughout the last decade is the symptom of a collapsing empire.

These regime change operations have also been tied to the destabilization of the climate, the emergence of the global refugee crisis, the exacerbation of unsustainable wealth inequality, the move towards a third world war, and the rise of xenophobic and nationalistic politics. Due to its relentless foreign aggressions, the U.S. continues to regularly expand a military that functions as the largest polluting entity in the world; the U.S.-engineered destruction of Iraq, Libya and Syria, as well as the political and social crisis that's been brought about by America's 2009 coup in Honduras, are behind the great influx of migrants to the First World; the West's neocolonial projects, such as the ones in Iraq and Honduras, have resulted in neoliberal policies that increase the gap between rich and poor within the conquered countries; America's wars against Venezuela, north Korea and Syria-countries which are allied with Russia and China-have escalated the tensions between the U.S. and its rival nuclear superpowers; the refugee crisis, the militarization of Western society, and the authoritarian environment of a Western world that's perpetually at war has created the conditions for fascism to rise.

There's an element of instability to everything that the empire does these days. Even Daza's recent propaganda campaign is a kind of systemic reaction to instability, since the anti-Morales operatives have exploited a climate change-created Amazon crisis in order to vilify Bolivia's government. The trend that this dynamic creates is movement towards more societal destabilization, more environmental damage, and more power for fascists like Bolsonaro, whose profit-motivated creation of the Amazon fires has been ignored in the international media thanks to the scapegoating of Morales.

Related Topic(s): Bolivian Revolution; Capitalism; Empire; Guardian; Propaganda; Regime Change; Venezuela, Add Tags
Add to My Group(s)
Go To Commenting
The views expressed herein are the sole responsibility of the author and do not necessarily reflect those of this website or its editors.