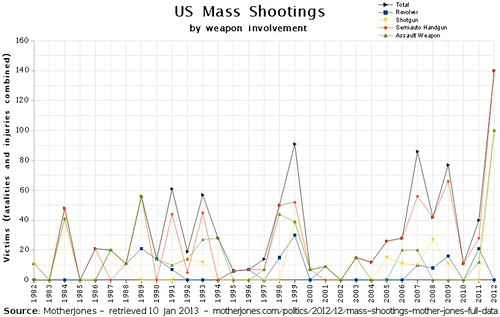 We will never understand the mass killings in Orlando, Aurora, Newtown, or any of the many others, until we take a long hard look at ourselves in a mirror. Why does this happen so frequently, and why is it such a rare occurrence in other industrialized nations? We cannot comprehend this because we fail to come to grips with certain very hard realities about who we are as a nation and a people.
There are cries for gun control every time a massacre occurs, and never once has anyone pointed out the hypocrisy of trying to stop the flow of guns to the US public, while the US government floods the entire world with weapons. We are the undisputed leader in selling killing weapons around the world, and no ever questions the hypocrisy of a government trying to take guns from its people, while our government and military-industrial complex inundates the world with weapons. Government always sets the model for the people, and here we have a great example.

Mass murderers have absolutely no regard or respect for law, and once again it is the US government who sets the example for its people, by defying international law and invading and bombing anyone in callous contempt of the law. Government officials huddle secretly once a week to decide what individuals must be "taken out," paying no attention to the legality of murder without charges, evidence, or a trial. Currently, Secretary of State John Kerry, the nation's chief diplomat, is calling for regime change in Syria. What gives the US the legal right to decide who will rule Syria? Nothing; there is no legal right that gives the US the power to determine leadership of another nation. The US has sponsored untold numbers of illegal coups of democratically elected leaders, but again, so much for the law. If the US government is so callous about law, and constantly sends the message that we don't care about law, why would it be a surprise when citizens do the same? The government sets the example and the people follow.

The hardest thing for citizens to reconcile is just how violent a nation we are. Our government is a mass killer. The first people to get in our way were exterminated. We ethnically cleansed the American Indian from his own land. We then enslaved a race of people. More recently, we killed 3 million people in southeast Asia. Can you explain why? We have killed about one million over the past 20 years in Iraq. Do you know why? We invaded Iraq based on a series of lies claiming they had WMD; a hoax that led to a needless slaughter. Iraq was a war of choice, which is illegal, but who cares about law? Do you know how many nations the US is currently bombing? We have killed untold innocents in Afghanistan over the last 20 years. Can you explain why? Do you know why we bombed Libya for 7 months, turning it into a completely failed terrorist state? Media, pundits, and presidential candidates, condemn Muslims, but the US government has bombed 14 Muslim nations, and perhaps has killed as many as four million Muslims in our never-ending wars. War has become the American pastime. We are always looking for new enemies, and when none are around our government creates them up by demonizing leaders who might challenge our authority such as North Korea, Venezuela, Cuba, Russia and China. We are dangerously provoking both Russia and China almost daily. The State Department has been taken over by war-crazy neocons who are risking a nuclear holocaust. It is no wonder that in a poll of 68 nations, the US was named the biggest threat to world peace.

Weapons of war are the leading export. The military consumes the lion's share of the US budget, and everything else is sacrificed to pay for the largest military in the history of the planet. We spend more on security, war, and defense, than the rest of the world put together. There is no money left for anything else, so kids go to college and acquire a mortgage, while college is free in most industrialized nations. We have the worst health care in the industrialized world, paying huge sums for poor health care compared to the rest of the world. Health care is a right in most civilized nations, but they don't have the enormous cost of never-ending wars that we do. They have luxuries such as free college, excellent government health care, high-speed trains, great airports, and infrastructure. Other nations, because they have better health care, treat mental illness. We cannot afford it, as all money goes to support the military. Just about all of the mass murderers have been emotionally troubled, but because we do not treat mental illness, they take up arms and kill. We give lip service to our veterans, but let them live under bridges as homeless troubled people. Other nations offer treatment to troubled individuals.

The murder rate in this country is light years ahead of other nations. We have an industrialized prison system with more people incarcerated than any other country in the world. War is glorified and neither the military nor the police can do anything wrong. An entire new generation has known only war in their lifetime. African Americans are shot down in cold blood by police, with more than 1000 killed last year, with 50% being unarmed, and none of their killers are held responsible. Without cell phone videos, those deaths would be swept under the proverbial rug.
So take a long thoughtful look in a mirror. Government sets the example and we follow. Our government's prime concern is making war on others and killing those who get in the way. We are a cold-blooded violent nation led by a cold-blooded government, so when all too frequently the blood of our citizens flows in the streets, why are we shocked?

Related Topic(s): Bombing; Government; Mass Murder; Mass Shooting; Military; Police; Wars; Weapons, Add Tags
Add to My Group(s)
Go To Commenting
The views expressed herein are the sole responsibility of the author and do not necessarily reflect those of this website or its editors.