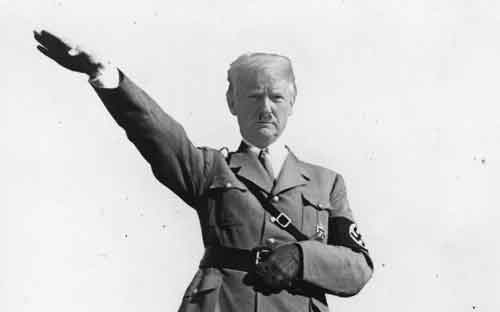 I have been trying to explain the millions of Americans---Republicans Christians, Jews, Blacks, Hispanic and college-educated white voters--- who watched Trump stand in the middle of 5th Avenue and shoot freedom, equality and justice in the head, and are still voting for him in November.

They don't care that he lost more money than any other American, bankrupted his businesses six times, is an adulterer, a liar, and that he grabs women by the p*ssy.

It's not an enigma wrapped in a riddle. Roe vs Wade, Moving the Embassy to Jerusalem, the Wall, the Economy, Iran or Climate Change, none of them solve the mystery.

Forty percent of Americans have an inclination to authoritarianism and favor authority, obedience and uniformity over freedom, independence and diversity. [1]

That 40% includes the Senate who will not impeach Trump regardless of what the House finds, the federal judiciary, two Supreme Court justices, the 194 lifetime appointed judges in lower federal courts, and of course "the very fine people on both sides."

And don't forget the leader of the Senate Committee on the Judiciary, Lindsey Graham, who before Adolf, oops before Trump, was elected, called him "a race-baiting, xenophobic religious bigot that should to go to Hell."

Today Graham won't condemn the President over his racist tweets against several minority members of Congress, instead joining him in calling them a "bunch of communists."

Graham's comments are the latest example of congressional Republican alignment with Trump.

"Well, we all know that (New York Rep. Alexandria Ocasio-Cortez) and this crowd are a bunch of communists, they hate Israel, they hate our own country," Graham said during an appearance on "Fox and Friends." "They're calling the guards along our border, the border patrol agents, 'concentration camp guards.' They accuse people who support Israel of doing it for the Benjamins. They're anti-Semitic. They're anti-America."

Related Topic(s): Adolph Hitler; Donald Trump; Donald Trump Racist; Donald Trump Supporters; Hitler; Hitler Brownshirts; Hitler Youth; Jews; Voting; Voting Integrity, Add Tags
Add to My Group(s)
Go To Commenting
The views expressed herein are the sole responsibility of the author and do not necessarily reflect those of this website or its editors.