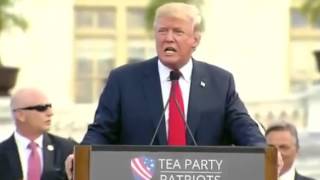 The connection of an anti-Iran exile group to senior members in the Trump administration may explain why the US president has taken such a hostile line towards the Islamic Republic, declaring it a number one state sponsor of terrorism and slapping new sanctions on Tehran.

It turns out that an Iranian dissident group with suspected links to Israeli and Saudi state intelligence may have the ear of the president in setting his policy.

Other senior political figures close to the Trump inner circle who are also associated with the MEK include Republican party grandee Newt Gingrich, former CIA director James Woolsey and former US ambassador to the United Nations John Bolton.

The MEK originated as an armed insurgency against the US-backed Shah dictatorship during the 1960s. It later fell foul of the Islamic clerical government that has ruled Iran since 1979. The Iranian authorities have designated the MEK as a foreign-backed terrorist group. It is estimated to have carried out up to 17,000 killings against Iranian citizens in an attempt to destabilize the Islamic Republic. The assassination of Iranian nuclear scientists in recent years has been linked to MEK operatives, orchestrated by American and Israeli intelligence. Republican elder statesmen Newt Gingrich, who is a foreign policy adviser to Trump, famously called for more such assassinations.

Oddly enough, considering the group's connections to senior Washington figures, the MEK was also responsible for the killing of at least six American servicemen and military contractors during the 1970s, when it was opposed to the US-backed Shah. The MEK declares that it has since renounced armed violence, officially as of 2001, and it blames the earlier killings of American citizens on a splinter group. It was taken off the US blacklist of foreign terror groups in 2012 -- a move that was earlier recommended by the Washington-based Brookings Institute in 2009, when the think-tank referred to the MEK as a useful proxy for regime change in Iran.

According to a report this week from Associated Press, Trump's transport secretary Elaine Chao received $50,000 for a five-minute speech she gave in 2015 at a rally held in French capital Paris, which was organized by the political wing of the MEK. Attending the same rally was Rudy Giuliani who gave a vehement speech calling for regime change in Iran.

Chao, who is married to Senate Republican leader Mitch McConnell, received an additional $17,500 for a speech she delivered in March 2016 at another rally held in the US organized by Iranian dissident groups linked to the MEK.

Giuliani was considered by Trump for the post of Secretary of State before the top diplomat job was finally given to Rex Tillerson, the former chief executive of Exxon Mobil. Last month, Giuliani and other former US officials wrote a letter to Trump calling on the new administration to establish a dialogue with the MEK's political wing, reported the AP.

This lobbying background serves to explain why the Trump administration has taken an abruptly hostile line towards Iran.

There have been reports in US media that one motive may be that the Trump administration is trying to split the de facto alliance between Russia, China and Iran. So far, that gambit does not seem to be gaining any traction. Both Russia and China have denounced the new American sanctions imposed on Iran as counterproductive to international relations.

Moscow has also rejected Washington's allegations against Iran as a state sponsor of terrorism. Russian foreign minister Sergey Lavrov said that Iran was, on the contrary, a key partner in defeating Islamist terror groups in Syria and Iraq.

Moreover, Russia this week defended Iran's sovereign right to develop defensive military technology and said that its testing of ballistic missiles at the end of last month did not violate the 2015 P5+1 nuclear accord. Nor did they breach UN Security Council sanctions, says Moscow, because the missiles in question were conventional in nature and not designed to carry nuclear warheads. On the face of it, therefore, the pretext for Trump's hostile turn towards Tehran does not make sense.

Related Topic(s): Iran; Iran Versus Israel; MEK; Sanctions; Trump Presidency, Add Tags
Add to My Group(s)
Go To Commenting
The views expressed herein are the sole responsibility of the author and do not necessarily reflect those of this website or its editors.