Let us count the ways. 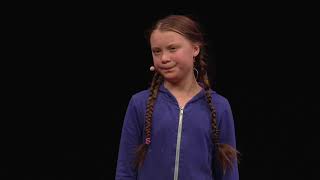 A year ago, inspired by Swedish schoolgirl Greta Thunberg, young people around the world began climate striking -- walking out of school for a few hours on Fridays to demand action against the global warming that darkens their future. In May, when 1.4 million kids around the world walked out of school, they asked for adults to join them next time. That next time is September 20 (in a few countries September 27), and it is shaping up to be the biggest day of climate action in the planet's history. Everyone from big trade unions to a thousand workers at the Amazon headquarters, and from college kids to senior citizens, are setting the day aside to rally in their cities and towns for faster action from our governments and industries. You can find out what's happening in your community at globalclimatestrike.net.

But it will only be a success on the scale we need if lots of people who aren't the regular suspects join in. Many people, of course, can't do without a day's pay or work for bosses who would fire them if they missed work. So, it really matters that those of us with the freedom to rally do so. Since I published the first book for a general audience on climate change 30 years ago this month, I've had lots of time to think about the various ways to move people to action. Let me offer a few:

§ Strike, because the people who did the least to cause this crisis suffer first and worst -- the people losing their farms to deserts and watching their islands sink beneath the waves aren't the ones who burned the coal and gas and oil.

§ Strike, because sun and wind are now the cheapest way to generate power around the world -- if we could match the political power of the fossil fuel industry we could make fast progress.

§ Strike, because we've already lost half the animals on the planet since 1970 -- the earth is a lonelier place.

§ Strike, because our governments move with such painful slowness, treating climate change as, at worst, one problem on a long list.

§ Strike, because this could be a great opportunity -- and maybe the last opportunity -- to transform our society towards justice and towards joy. Green New Deals have been proposed around the world; they are a way forward.

§ Strike, because forests now seem like fires waiting to happen.

§ Strike, because young people have asked us to. In a well-ordered society, when kids make a reasonable request their elders should say yes -- in this case with real pride and hope that the next generations are standing up for what matters.

§ Strike, because every generation faces some great crisis, and this is ours.

§ Strike, because half the children in New Delhi have irreversible lung damage simply from breathing the air.

§ Strike, because Exxon and the rest knew all about global warming in the 1980s, and then lied so they could keep cashing in.

§ Strike, because what we do this decade will matter for hundreds of thousands of years.

Bill McKibben is the author of a dozen books, including The End of Nature and Deep Economy: The Wealth of Communities and the Durable Future. A former staff writer for The New Yorker, he writes regularly for Harper's, The Atlantic Monthly, and The (more...)
Related Topic(s): Adults; Climate Change Protest Activism; Climate Crisis; School; September 20; Strike, Add Tags
Add to My Group(s)
Go To Commenting
The views expressed herein are the sole responsibility of the author and do not necessarily reflect those of this website or its editors.