Why Republicans love Ronald Reagan: That is all they have

The facts tell us that under Reagan taxes were raised, loopholes were closed, and government did grow. Defense spending went up, and the number of federal workers increased, so why do conservatives always offer Reagan as their patron saint? Simple: they have nothing else to offer. If we go back to FDR, the following graph tells the story very clearly. 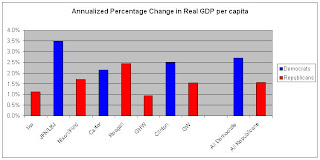 In 1932 the population of the US was approximately 124 million and unemployment was 13 million and the country was in the worse economic period in our history. I remember my mother telling me about the constant stream of people coming to the door asking for food. Between 1932 and 1933 over 9000 banks closed, unlike the past few years where banks in trouble were eaten by larger institutions.

After Truman refused to run in 1952, war hero and supreme commander Dwight D. Eisenhower took office and although a great general, he was not suited for the job of president and the country had little growth. It was Ike that warned of the "military industrial complex, a warning that unfortunately was ignored.

In 1960, the country elected the first Roman Catholic in JFK. Kennedy's term was of course cut short by assignation but doing his brief term in office, he led the country into the era of space which became the building block of the 20th and 21st century. He also began the move to lead the country away from racial discrimination. Kennedy will always be remembered for his inaugural address where he said, " ask not what your country can do for you; ask what you can do for your country". One cannot help but wonder if the country and perhaps particularly the United States Congress have not forgotten his words.

After the death of JFK, Lyndon Johnson, Kennedy's vice-president became president and although Johnson had a rather questionable history in Texas, under his administration the country saw the civil rights bill passed, taxes decreased, and the huge "jump into space"; then came the Nixon years, a dark period in history that saw him leave office in disgrace.

Jimmy Carter, although only a one term president may be the most under rated president of the 20th century, in that he made great strides in the environment before the environment became a mainline issue, created the Department of Education, brought peace between Egypt and Israel. He also appointed a number of women, blacks, and Hispanics, along with shoring up Social Security. Of course, Carter won the Nobel Peace Prize in 2002 acknowledging his unselfish contributions to the world. The job growth under Carter was only slightly less than Reagan.

Gin Arnold is a 70 year old liberal living in Cotacachi, Ecuador after living in S. Alabama. I have owned several businesses, lived aboard a 32 foot sailing yacht, been a bar tender, boat captain, short order cook, and imported furniture from (more...)
Related Topic(s): Reaganomics; Republican; Republican Awakening Former; Republican GOP Dirty Tricks; Republican Legislation; Republican Sexism; Republicanism; Republicans-GOP, Add Tags
Add to My Group(s)
Go To Commenting
The views expressed herein are the sole responsibility of the author and do not necessarily reflect those of this website or its editors.

Why Republicans continue to worship Reagan

How Dead is the Republican Party?

I have voted against "conspiracy thinking" but Mr. M may be right and I may be wrong

I tried to retire.

Is it time to take a look at the way business is done in America?