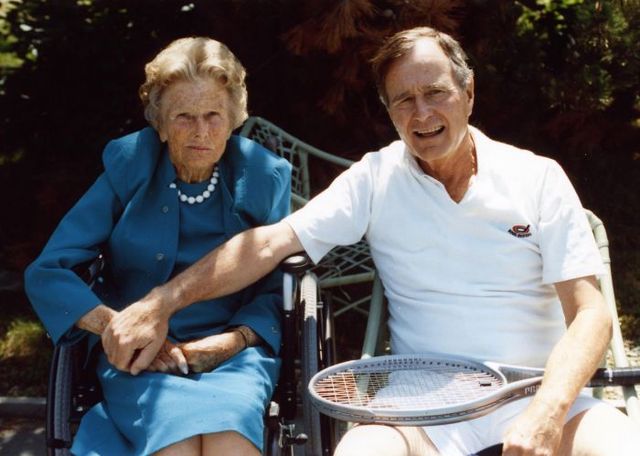 Unless you live under a rock (and probably even if you do), you've noticed the death of George Herbert Walker Bush, 41st President of the United States, on November 30, at age 94.

You've probably also suffered through multiple personal remembrances of the man and his presidency -- some positive, some negative, some mixed. Mine, which you may read below if you're not already worn out on the topic, is of the latter variety.

First, Bush made it inevitable that I would leave the armed forces rather than serving 20 years and retiring. He did so by kicking off a post-Cold-War round of cuts in military spending that continued into the Clinton era.

Those cuts, in addition to being a darn fine idea that I wish the current administration would emulate, led to a situation in which, instead of signing a new enlistment contract with the Marine Corps reserve, I received several six-month "extensions." When I got tired of piles of new paperwork every six months, I took my honorable discharge (in 1995) and moved on to new and different pursuits. I did and do love the Marine Corps. I suspect I love it more than I would have loved it if I'd remained in it into his son's presidency. So thank you, President Bush.

Secondly, Bush's presidency caused me to reconsider my (fairly short as such things go -- I was young and still malleable) commitment to "conservatism" and to the Republican Party. It's entirely possible that, had he not reneged on his "read my lips -- no new taxes" pledge, I would have voted for him in 1992 and have remained a Republican voter to this day.

I told myself that if Bush kept his word on taxes, I'd support him for re-election; if he didn't, I wouldn't. He didn't, and I didn't ... but I wasn't going to vote for Bill Clinton, either. I carried ballot access petitions for, and voted for, Ross Perot in 1992. Then I conducted an agonizing reappraisal of my convictions and went looking for a movement and a party to match them. I became an ideological libertarian circa 1993 and a Libertarian Party member in 1996. So thank you again, President Bush.

American politics has changed since Bush's presidency, and mostly not for the better. It seems reasonable to lay at least partial responsibility for some very bad things -- in particular, the extension of his feud with Saddam Hussein into a series of foreign policy fiascoes that plague us to this day -- at his feet. There were plenty of ugly things about the man and about his presidency, and I have no problem with those who ignore the old admonition to speak not ill of the dead.

But I'm still grateful to the president of my early adulthood for shaping my life in ways he probably almost certainly didn't intend.

Related Topic(s): People GHW Bush, Add Tags
Add to My Group(s)
Go To Commenting
The views expressed herein are the sole responsibility of the author and do not necessarily reflect those of this website or its editors.