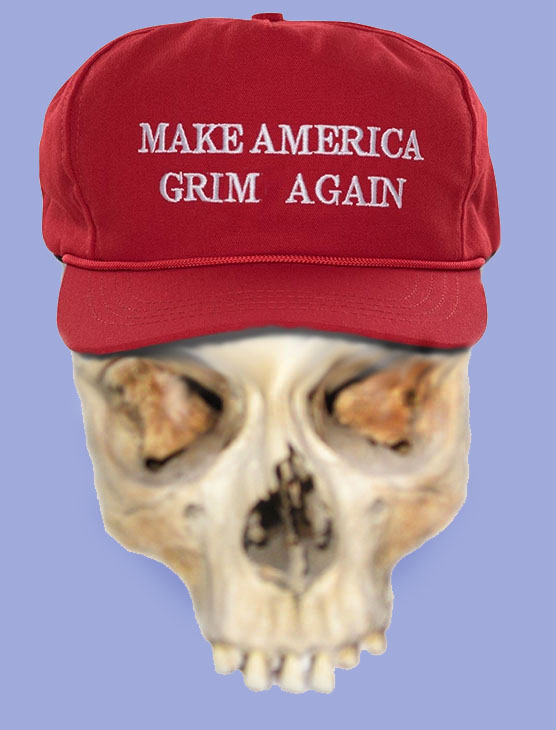 Have you noticed you rarely see Trump supporters wear their darling red MAGA caps in public? Why is that? You see them in abundance at Trump rallies, but rarely at social affairs or sporting events or even in stores or shopping malls.

If the polls are right and Trump has roughly a 40% approval rating, you'd think you'd see a wide swath of red caps at any public gathering. But you don't. Could it be that Trump supporters are afraid to wear their red caps in public because they want to avoid embarrassment or confrontation? Or is it something else?

Perhaps Trump supporters don't wear their MAGA caps in public for the same reason that Ku Klux Klan members don't wear their pointed white sheets to the grocery store. Because deep down they know these caps don't just represent Trump; they represent their own prejudices. In other words, they're fine to wear when they're in a group or at a rally where kindred spirits abound and they feel comfortable. But not in the general public where putting their prejudices on display would make them stand out and create problems.

Naturally, Trump supporters will deny this, the same way Archie Bunker denied that he was prejudiced against blacks or minorities. (And what is Trump, after all, but a rich and powerful Archie Bunker.) But the sad truth is, our country has always been divided by rich and poor, liberal and conservative, dove and hawk. And in a deeper psychological way by the forces of love and compassion versus those of fear and insecurity.

Going back to the Civil War, you see these contrasting forces on display with the issues of slavery, then civil rights, then the women's movement, etc. These same forces were also on display during seminal moments in history, like the Vietnam War, when Americans were divided on whether to end it or continue fighting.

Fortunately, as Martin Luther King Jr noted, the arc of the moral universe is long, but it bends toward justice. As proof of this, the United States eventually did get out of Vietnam; blacks and minorities did get a civil-rights bill; and women are in the process of gaining more social and political power.

Of course, the historic tug of war between the forces of good and evil are never consistent or absolute. Nor are the victories or gains that make the country a better place. What's more, they never happen quickly or without struggle, hardship, and death. Today we are in a particularly dark period of history thanks to Trump's demagoguery and the mindless fealty of his supporters.

Just witness a Trump rally and watch how artfully the dear leader stokes the fears and insecurities of his ardent followers. And now that the poor old Hillary chant of "Lock her up!" is becoming a little stale, the more creative members of team MAGA have replaced it with: "Send her back!" referring to Congresswoman Ilhan Omar, who comes from Somalia. Indeed, you'll find very little love and compassion on display at these affairs. And you get the feeling that if Trump supporters could press a button and jettison all the brown and black people in the country into outer space, they would do it in a heartbeat.

Of course these are the same God-fearing individuals who deny global warming, reject socialism without even understanding it, and--against their own self-interests!--side with corporate America and the billionaire class in the name of capitalism, even as the wealth of the country becomes increasingly more concentrated in the hands of the upper one-tenth of one percent of the population.

One day, hopefully, we'll look back on this era and wonder why it took so long for such a large segment of the population to wise up and realize they were being played for saps. At present, however, the forces of fear and insecurity are at their highest levels since the "Red Scare" McCarthy era with "Don the Con" Trump playing the role of tough guy fascist pandering to the worst instincts of ordinary Americans, the same way Senator Joe McCarthy did with his hate-filled, anti-communist rants and accusations. In fact, one could make the case that McCarthy's followers were the forerunners of the Tea Party and the Trump ditto heads.

Although it may seem like a bit of a stretch, the comparison between Trump and McCarthy is not only valid but quite striking because Roy Cohn, perhaps one of the most loathsome men of the last century, was not only McCarthy's right-hand man, but one of young Donald Trump's most influential mentors.

Which begs the question: Will all these evangelical Trump supporters put on their red caps when the Rapture comes, or will they hide them from Jesus behind their gun racks? In the meantime, America will wait for the arc of the moral universe to tick forward and toss Donald Trump into the trash bin of history, the way it did with Joe McCarthy.

Let's hope it's sooner rather than later.

John F. Miglio is a freelance writer and the author of Sunshine Assassins, a dystopian political thriller. His articles have been published in a variety of periodicals, including Los Angeles Magazine and LA Weekly. His most recent articles (more...)

Related Topic(s): America; Compassion; Embarrassment; Evangelical; Evil; Fear; God; History; History; Justice; (more...) Oppression; Progressivism; Rally; Rally; Rights; Supporters; Truth, Add Tags  (less...)
Add to My Group(s)
Go To Commenting
The views expressed herein are the sole responsibility of the author and do not necessarily reflect those of this website or its editors.

Did Donald Trump Pay to Have His Research Papers Written for Him in College?

The Conspiracy Against Renewable Energy

Time to Tax Super Rich and Corporations at 1950s Levels

The Road Less Traveled: The Difference Between Liberals and Conservatives