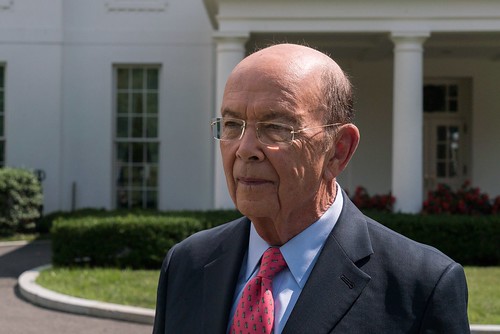 Article originally published in The Star-Ledger

By Robert Weiner and Kyle Fleck

Ross has local ties, born and raised in Weehawken. His mother graduated valedictorian from Sacred Heart Academy in Hoboken and taught third grade in North Bergen for 40 years. His father was a judge and served as commissioner of finance in North Bergen. Though mostly under the radar among the Trump chaos, Ross has found himself in the news recently, thanks to President Donald Trump's insistence on trade standoffs.

That media footprint may now change. Ross's labyrinth of Russian bank ties may have paid off Trump's five bankruptcies when no U.S. bank would. Many have asked how Ross was named secretary of commerce, seemingly out of nowhere.

Stormy Daniels' attorney, Michael Avenatti, has just reported, and the New York Times and NBC among others have confirmed, documents showing payments to Daniels right before the election through the Russian-sanctioned bank of Cyprus, where Ross had a controlling interest and was its head.

On a "Morning Joe" show segment last month, Joe Scarborough asked: "What does Vladimir Putin have over Donald Trump? You have to look at the finances. Maybe it goes though Cyprus where Wilbur Ross had a bank." CNN's Jake Tapper also asked Ross about his role with the bank.

It isn't surprising by now that elements of quid pro quo were at work when forming the nascent Trump administration back in 2016.

So how much does it cost to get a seat at the table in the Trump administration?

If you had connections to Trump's ballooning casino empire in the early 1990s, that number could be around $675 million. That's the figure Trump paid for the Taj Mahal in 1990, with a 14 percent interest rate. Rothschild bankruptcy division was then headed by Ross and specialized in distressed asset management. No assets were more distressed than Trump's Atlantic City casino empire. Ross swept in, representing the bondholders and getting Trump to give up a 50 percent stake while allowing him to remain in charge of the casinos with better interest rates. Trump ended his bankruptcy.

Even though the casinos went bankrupt twice more, Trump didn't forget the favor. When it came time to pick a commerce secretary, he chose Ross, paying him for saving his skin back in Atlantic City. "This guy knows how to make money, folks," Trump said.

After his career as a venture capitalist (sometimes a corporate raider), Ross got into private equity in 2000 and continued to invest in a variety of business interests. Navigator Holdings, in which Ross' investment firm holds a 31 percent stake, does business with Russian energy giant Sibur.

One of its major shareholders is the owner of a U.S. and E.U. sanction list company (for helping Russia invade Ukraine), Eastern Europe's biggest bank, Sberbank, the Russian state-owned bank based in Moscow. Ross conveniently forgot to disclose this information in his confirmation hearings. Russian President Vladimir Putin's son-in-law, Kirill Shamalov, along with other members of his inner circle, is also a primary shareholder in Sibur.

"When you start doing business with Russian energy companies like Gazprom and Sibur, you're ... getting into bed with the Russian state," Amos Hochstein, a top energy diplomat in the Obama administration, told the New York Times.

Several of Sberbank's chairmen were people with direct links to Putin, including Putin's son-in-law. In 2015, while Ross served as vice chairman of the Bank of Cyprus, the bank's Russia-based businesses were sold to a Russian banker and consultant, Artem Avetsayan, who Putin had appointed to lead an agency building businesses with Russian connections.