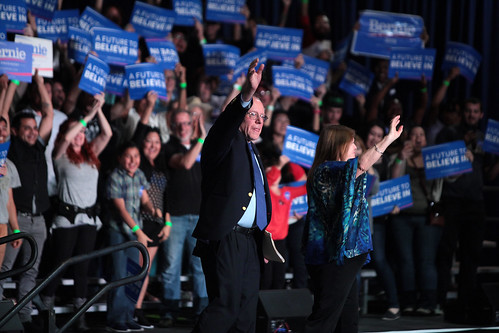 So CNN's Anderson Cooper and The New York Times's Sydney Ember and Katie Benner are on the case of gender-based dysfunction within the 2016 Sanders campaign. Apparently they have discovered that progressive women take gender issues seriously. Who knew?

The NYT report references Anderson Cooper's segment on the issue, but struggles to establish inappropriate conduct on Sanders's part, although Ember and Benner seem to want pretty badly to get there. In totality, it's remarkably thin in terms of documentation for a feature piece about a leading presidential contender.

It appears that Sanders and other 2016 campaign officials, including Jeff Weaver, did respond and seemed to acknowledge the need for greater attention to the matter. Ember and Benner nonetheless found it necessary to define many Sanders supporters as "Bernie Bros," a politically based smear label intended to polarize, which draws attention to the ad hominem and away from the very important issues on which Sanders's movement is focused. For some reason, the piece did not quote any of the high-ranking women officials in the Sanders organization. The piece makes a cursory case that some women in the campaign felt salaries were skewed but does little to establish a pattern factually.

In a broader sense, however, gender-based divisiveness presents a number of unique perils for the entire progressive movement and is not any place progressives want to go if meaningful progress is the objective.

Senator Elizabeth Warren's interview with Rachel Maddow aired at almost the same moment the NYT piece on Sanders went live. Warren was strong and showed once again that she has depth, substance, and mettle on progressive issues and that she is a viable option for President. Clearly, Warren and Sanders are at the head of the progressive class.

For the progressive base, that's good news. It's a luxury and a benefit to have two well-established, well-respected progressive leaders as legitimate contenders for the 2020 Democratic nomination. Both will need broad-based, energetic, and sustained support from women and men if they are going to focus the Democratic campaign season on a progressive agenda.

Buying into gender-based divisiveness at this stage of the process is highly counterproductive for the progressive movement. Neither Sanders nor Warren is new to the American political scene. Both have long track records and resume's. Redefining them at this stage is a tactic for defeating them. They are who progressives have known them to be all along. They will be challenged for suggesting that the system be changed fundamentally.

Related Topic(s): Bernie Sanders; Elizabeth Warren; Gender Equality; Issues; Progressives, Add Tags
Add to My Group(s)
Go To Commenting
The views expressed herein are the sole responsibility of the author and do not necessarily reflect those of this website or its editors.