Who is Today's Version of "Fighting Bob" La Follett? 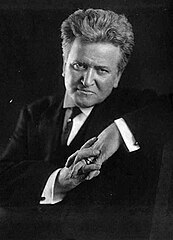 In the past, there were countervailing forces that occasionally succeeded in limiting the power of the rich. Organized labor was one such force. When most farms were small, there were a great many of them, and farmers constituted a significant political force. Neither group is a factor today.

Apart from identifiable groups that wielded power, there were, in the past, outstanding individual politicians who, even when outgunned by big money interests, were able to fight effectively for progressive causes, and occasionally win real victories. Prime examples are "Fighting Bob" La Follette, George Norris, and Fiorello La Guardia.

What did they accomplish?

While a member of the House of Representatives during a period in which the rich appeared to be in full command, Fiorello La Guardia [1] helped win the vote for women, pass legislation outlawing child labor, and defeat a number of measures characterized as pork barrel legislation. One of his memorable victories was passage of the Norris-La Guardia Act, which outlawed some of the key weapons used to crush labor unions. He later served three terms as the greatest mayor New York City ever had. He vigorously and successfully fought against the gangsters who, via Tammany Hall, had dominated NYC politics for many decades. Public housing, parks, highways and bridges were constructed, which, among other things, provided much needed employment during the thirties. (The emphasis on highways and other automotive infrastructure was, in my view, a negative aspect of this period.)

As a member of the House of Representatives in the 1890's, Robert La Follette [3], among other things, championed the rights of Blacks and Indians. Later, as Wisconsin governor, he fought, with considerable success, for such measures as a workers' compensation system, railroad rate reform, a minimum wage law, women's suffrage, and progressive taxation. Later, as a US senator, he fought for such measures as child labor laws, social security, and women's suffrage. He too voted against US entry into WW I, and subsequently defended people such as Eugene Debs, who were imprisoned for speaking out against the war. He opposed military conscription, and the Espionage Act (still on the books; it has been used by the Obama administration to imprison a number of people for giving information to journalists.)

La Follette completed his political career by running for president in 1924 on an independent ticket. His platform included the items mentioned above. He received about 17% of the popular vote, carrying Wisconsin.

These 3 men (all Republicans!) were important originators and supporters of most of the progressive legislation associated with the New Deal. They were staunch champions of civil liberties. It is striking that they fought for these measures, and sometime prevailed, during a period in which the congress was dominated by those hostile to their views.

Robert F. Wagner, a Democrat, fought on the same side, serving as a US senator for 24 years, including the entire New Deal period. He was a major factor in the passage of legislation establishing social security, passage of the National Labor Relations Act, and legislation facilitating the construction of low-cost housing.

Over the past century or so, the president who most effectively promoted a wide range of progressive ideas was Franklin Roosevelt. He succeeded on a number of fronts, such as providing security for the aged, implementing unemployment insurance, minimum wage laws, facilitating the growth of labor unions, and enhancing the public infrastructure via construction of bridges, roads, dams, etc.

I have mentioned a few political figures who played what I regard as key roles in promoting progressive ideas during the twentieth century. What Americans are playing similar roles today? Which politicians are leading battles against growing inequality, erosion of civil liberties, massive government eavesdropping, persecution of whistleblowers, environmental degradation, bloated military budgets, aggressive military adventures? Who is fighting for single-payer health care? Who is aggressively trying to end the massive influx of people from low-pay countries, a major factor underlying the sad situation of so many American workers, particularly those at the bottom? What politicians are actively trying to do something about record numbers of Americans being imprisoned, many for crimes that harm nobody but themselves?

Related Topic(s): Congress; Conservatives; Edward Snowden; Government; Heroism; Inequality; Infrastructure; Issues; Legislation; Libertarian; (more...) Militarism; Nomination; Obama; People; Workers, Add Tags  (less...)
Add to My Group(s)
Go To Commenting
The views expressed herein are the sole responsibility of the author and do not necessarily reflect those of this website or its editors.