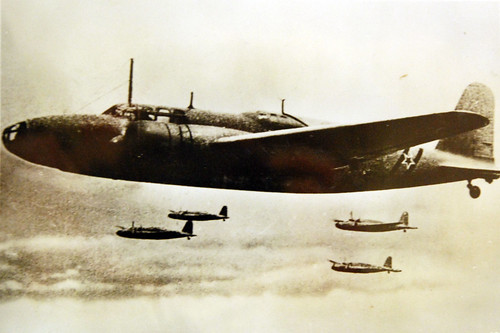 The 1937 bombing of Guernica by German and Italian planes during the Spanish Civil War, killed about 500 people (mostly civilians) [1]. Over 42,000 civilians were killed in a July 1943 bombing of Hamburg [2]. The bombing of Tokyo by US planes, on the night of March 9-10 1945, killed over 100,000 people (mostly civilians) [3]. This is considered to be the single most lethal bombing raid in history (with the possible exception of the atomic bomb attacks on Hiroshima and Nagasaki).

While the Guernica attack was widely regarded as an atrocity, (commemorated by a classic Pablo Picasso painting), the Tokyo bombing, 8 years later, 2 orders of magnitude more deadly, was noted only as a very successful operation [4]. How did this change in thinking come about?

Participation in wars numbs our sensitivity to brutality. In the case of WWII, the attitudes of top ranked American military officers underwent a gradual transformation as the war went on. The British, under Churchill, almost from the outset, used their bombers in night-time raids on residential areas, considering civilians to be legitimate targets. The US air force, opposed to the targeting of civilians, initially used its bombers only against military and industrial installations, despite the fact that this required daylight bombing, which was much more dangerous.

It was not until early in 1943 that the P-51 Mustang [5], a long-range, high performance fighter plane, was deployed to provide very effective protection for bombers penetrating deeply into Germany. This made possible daylight bombing without major losses of bombers. But it came too late. By that time, the losses of bombers had already persuaded the Americans to join the British in bombing civilians--mainly at night--which was much less dangerous.

(Subsequent studies indicated that the bombing of factories and transportation facilities was much more effective in defeating Germany than was bombing residential areas.)

Use of the A-bomb

By July, 1945, Japan was clearly defeated. Both its navy and its air force had been virtually wiped out. The only significant issue was the terms of surrender. The key element was the fate of the emperor. Concern that he might be treated as a war criminal motivated resistance on the part of the Japanese military to the idea of surrender, even after the emperor himself expressed his desire, at any personal cost, to end the slaughter of his people.

By this time the atomic bomb had been successfully tested. Top-level military officers, including Admiral William Leahy (the President's Chief of Staff), General Dwight Eisenhower, Admiral Chester Nimitz, and General Curtis LeMay, all opposed using the atomic bomb against Japan [6]. They argued that, even without the bomb, or the Russians attacking Japan, or an invasion, Japan was within at most a few months of surrendering.

A conclusion formally reached by the United States Strategic Bombing Survey in its Summary Report (Pacific War): "Japan would have surrendered [by late 1945] even if the atomic bombs had not been dropped, even if Russia had not entered the war [on August 8], and even if no invasion had been planned or contemplated" [7].

Nevertheless, President Truman refused to offer assurances about the emperor, or to even consider negotiations; he insisted on unconditional surrender. After use of the A-bomb, and the capitulation, the emperor was left unmolested as the token head of state.

Rather than ushering in an era of peace, victory in WWII seemed to whet the appetite of the US government for war. In 1950, in a situation where no significant American interest was at stake, and where the leadership of both sides was of an unsavory nature, the US intervened in a civil war in Korea. Over 36,000 Americans were killed in this war, which lasted about 3 years. There was massive bombing, with no serious effort to restrict it to military targets [8]. (Killing civilians in their homes was now considered OK by those in charge.) Out of a 1950 North Korean population of a little under 10 million, about a million civilians, and 300,000 combatants were killed [9].

The encore was the 14-year war in Indochina. Again the US intervened to support a ruthless, unpopular government. Starting with 900 troops in 1960, US troop levels in Vietnam peaked at 536,100, in 1968 [10]. By 1973, over 58,000 Americans had been killed [11]. Estimates (these are very crude) of Indochinese (Vietnamese, Cambodian, and Laotian) deaths are, respectively, 2.5 million, 0.8 million, and 1 million [12]. Note that the government, as is often the case, did not try very hard to estimate the number of people it killed.

In 1953, between the Korean and Indochinese wars, the US, via the CIA (Central Intelligence Agency), collaborated with the British in a coup to overthrow the democratically elected government of Iran, headed by Prime Minister Mohammad Mosaddegh [13]. This empowered the Shah, Mohammad Reza Pahlavi, who remained in power until the 1979 Iranian Revolution.

The democratically elected president, of Guatemala, Jacobo Arbenz, was ousted by the CIA in 1954. This led to the imposition of a brutal regime, and eventually about 200,000 deaths [14].

The US organized and funded the Bay of Pigs invasion of Cuba in 1961, and the CIA made a number of attempts to assassinate Prime Minister Fidel Castro [15].

Related Topic(s): War Conflicts Regional; War Human Cost; World War Two, Add Tags
Add to My Group(s)
Go To Commenting
The views expressed herein are the sole responsibility of the author and do not necessarily reflect those of this website or its editors.