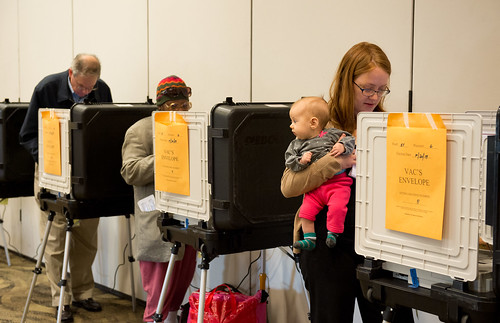 Governor Votes Early
(Image by MDGovpics)   Details   DMCA
The previous article of this series initiated a review of the voting systems that had been described earlier in this series of articles on balanced voting. In that last article, we first described the circumstances of a hypothetical election and considered each electoral system in turn to see how that specific election might might turn out under the different voting system. Here we will continue that survey and then step back from the conclusions to try to draw some conclusions.

The election under consideration is between three candidates. The voters are strongly focused on a single issue and two of the candidates, Isfor and Isagien, represent the two different sides of that issue. The voters split pretty evenly between the two. Nearly every voter prefers either Isfor or Isagien but opposes the other of those two. The third candidate, Benute has managed to remain neutral on the issue of the day, but Benute, being well liked by nearly all voters is the second choice for essentially all of the voters.

So suppose this election were conducted using IRV (instant runoff voting). Just about all of the voters would list their first choice as either Isfor or Isagien and as a result, in the first counting of the votes, Benute would be eliminated. The election would likely be a very close one with either Isfor or Isagien winning by an insignificant margin over the other. Perhaps some voters would feel better, having had the opportunity to cast a second-place vote for Benute, but in the counting those second-preference votes would not enter into the counting.

However, there is an interesting lesson here that is worth contemplating. Some voters, let us say one whose first choice is Isagien, may assume that the way to send a message of opposition to Isfor would be to list Isfor as the last choice among the three candidates. But after the first round, Benute is eliminated so in subsequent rounds of counting, the vote in question is for Isagien, but the second-choice appears as for Isfor. That is not a problem in this case since after the first count, only one additional count needed - but it does point out that listing a candidate in the order of preferences is, with IRV, an indication of a preference for that candidate. If that preference ever registers in a count it will register in favor of the candidate, never against.

But another alternative would be IRBV (instant runoff balanced voting). As with IRV, the initial count of first-choice entries on ballots would result in the elimination of one candidate and so the ballots would be counted at most twice. If the voters all decide to cast their ballots the way they would in the case of IRV then, just as with IRV, the second counting would be a close contest between Isfor or Isagien.

But if we assume the voters have learned about balanced voting methods then, for example, a voter who favors Isfor will realize that choosing to vote against Isagien rather than for Isfor makes no difference in the contest between Isfor or Isagien but it does make Benute more competitive. If at least half of the voters decide to cast votes against rather than for then Benute will make it to the second round of counting. The second round of counting is apt to be a close race between Benute and either Isfor or Isagien, but without at least a little first-choice support, Benute would lose in this second round of voting.

One of the entries in this table is for a voting system that has not been mentioned before, the traditional rationed voting system. It may be ironic to label as "traditional" a system that may never have been mentioned before, but in this context the word "traditional" only means "not-balanced". In this particular election with three candidates, a voter would be handed three plurality ballots for the voter to fill out and turn in for counting as they would be counted in a plurality voting system. Voters would likely give two or three ballots to their favored candidate -- either Isfor or Isagien -- and perhaps a single ballot for Benute. Benute would lose and the winner would be either Isfor or Isagien.

From this limited perspective, considering just this one special makeup of voter opinions, a couple of things jump out from the table. One is that approval voting, balanced or not, seems to be distinguished by giving a likely win to Benute. But with this one exception, the traditional systems do not provide a real opportunity for Benute to win.

In sharp contrast, each of the balanced voting systems provide a reasonable opportunity for Benute to win the election. This is consistent with the notion suggested from the very start of this series of article that adopting a balanced voting system open not merely the possibility of a multiple-party system, but in fact the likelihood of such a transformation.

In another article, we show how all of these voting systems can be expected to behave in a different election.

Related Topic(s): Alternative Voting Systems; Election; Party Loyalty; Third Parties; Voting; Voting Systems, Add Tags
Add to My Group(s)
Go To Commenting
The views expressed herein are the sole responsibility of the author and do not necessarily reflect those of this website or its editors.